Contemporary illustrations of Emishi are nearly non-existent. The earliest rendering comes from the Kamakura period from the painting that is supposed to represent China painted by Fujiwara Nobuzane who was a well-known court artist. Of course Nobuzane's people are rendered anachronistically in contemporary Japanese clothing, and more importantly an everyday scene, that he must have seen many times, of river boats, oarsmen and porters was illustrated in the painting Kitano tenjin engi (AD 1194). One of these river boat men is unmistakably of Emishi or Ezo ethnicity. This is certainly a painting that is not formerly of any Emishi, but the rendering is so realistic and so natural as to be unmistakably of contemporaries that he must have come in contact with. The earliest definite rendering is from the Muromachi period (AD 1324). It is more accurate to say that illustrations exist of the Ezo, because by the Kamakura period that is what the people formerly known as the Emishi were called. However, the few images are nonetheless very instructive in that they render unmistakably (and identifiably) an Ainoid group. 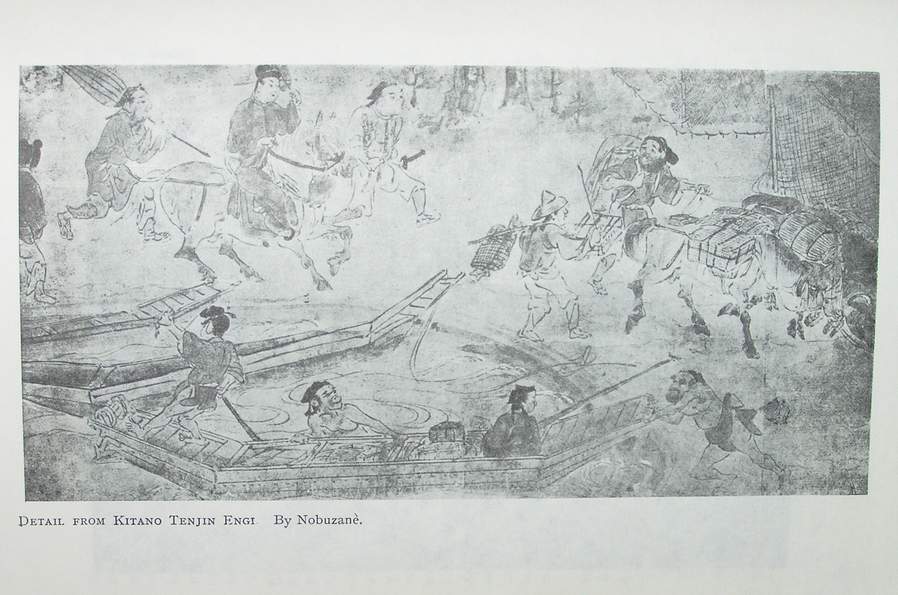 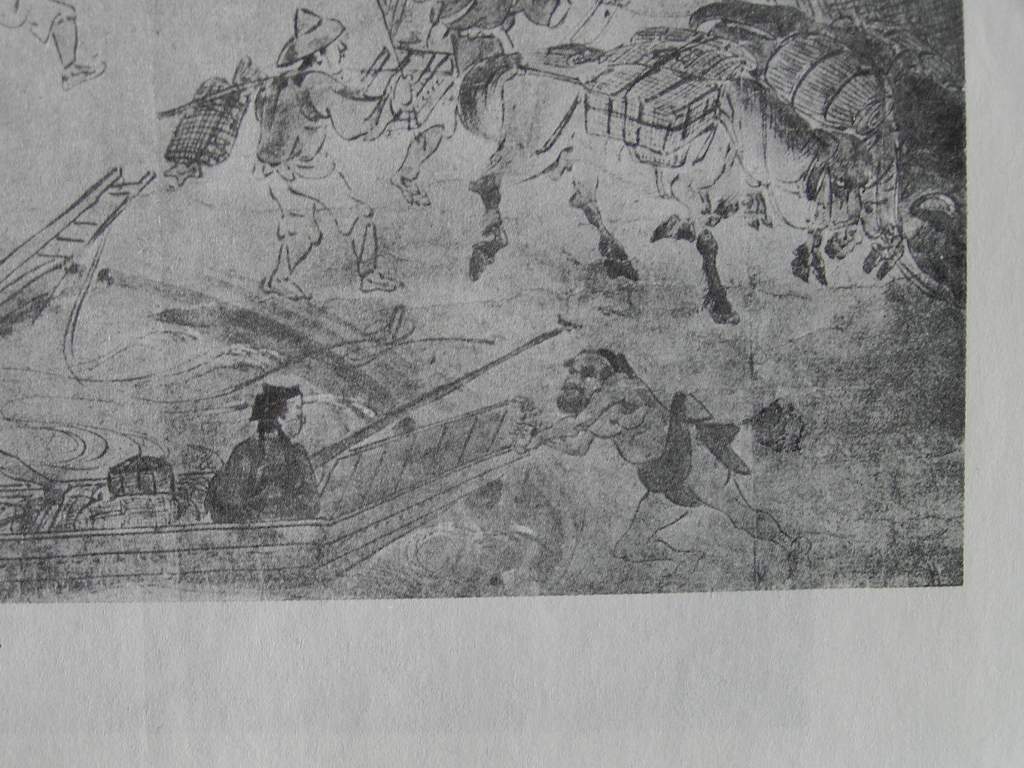 Close-up detail of the river boat man on the bottom right. With almost near certainty this is an Emishi/ Ezo individual.

Actual picture of Emishi people from AD 1324. From Shotokutaishi e-den e-maki. This is reportedely a copy of the AD 1069 Heian period painting of a similar scene of Prince Shotoku receiving homage from the Emishi. The original painting suffered extensive damage so that only the outline of the Emishi figures is seen. The figures here are historically accurate and perhaps come closest to rendering the Emishi as they appeared. The original from which this is taken is the earliest known rendering of the Emishi, some one hundred and fifty years after their final conquest. 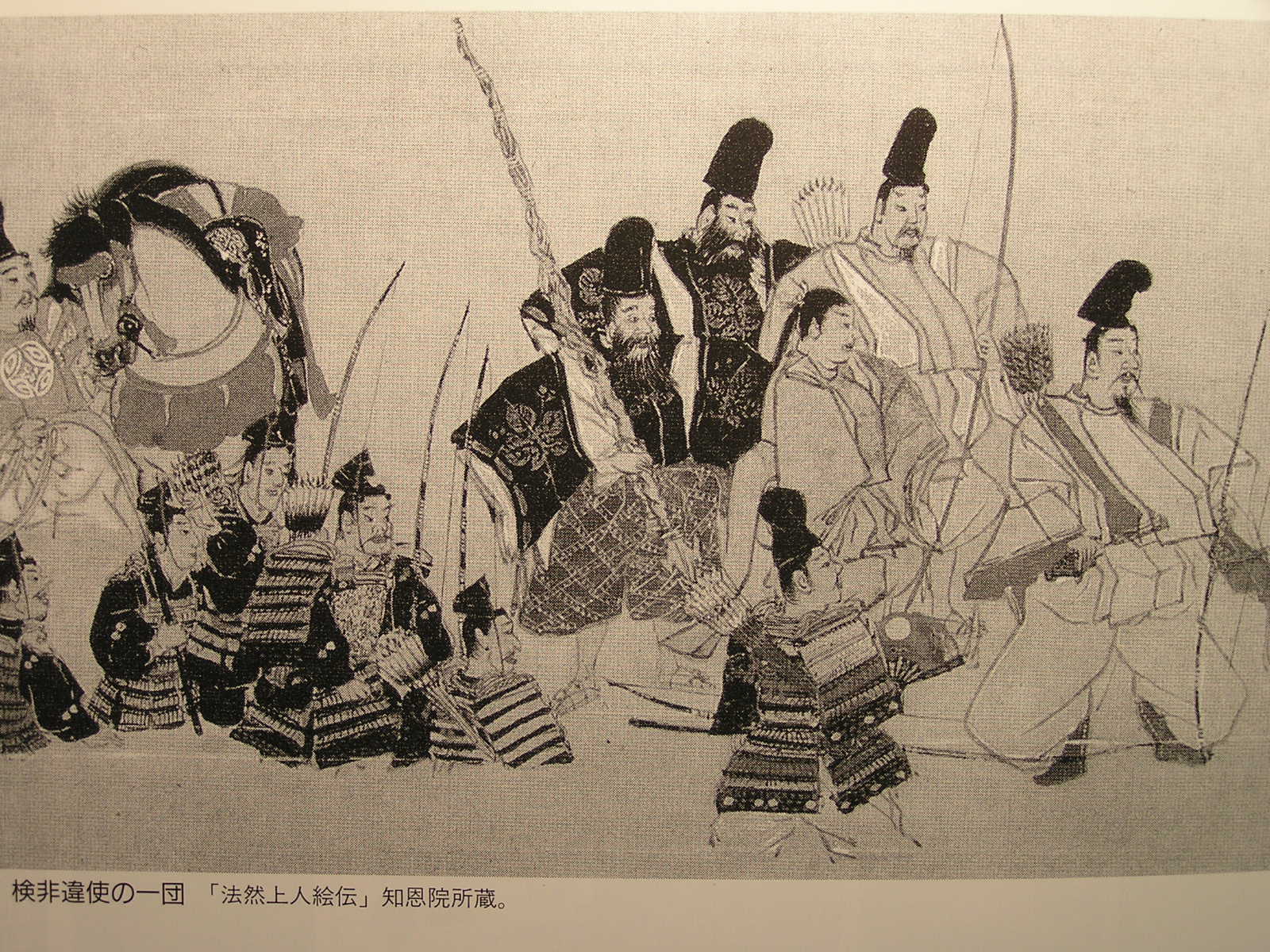 This is an illustration of a warrior band from the famed Minamoto clan whose forces were instrumental in defeating the Taira. The warriors in the middle are actually members of the Capital (Kyoto) constabulary force (Kebiishi) who provided the most effective security forces before the rise of the warrior clans like the Minamoto. Many of the Kebiishi were drawn from the Kanto region, and this picture depicts what looks unmistakably like a portrayal of a couple of warriors who are descendants of Jomon people (middle two figures) from the districts or villages where their descendants still resided. Though the painting is an indirect relationship it shows characteristics that distinguish the Emishi as well. Notice the very heavy beards in contrast to the goatees of the other warriors. From a early Fourteenth century emaki (Ho-zen Shonin E-den). Photo from Minamoto-shi tai Hei-shi (2004). There are other pictures of the Kebiishi that corroborates their physical appearance. It seems that a proportion of those who resided in the eastern provinces still retained Jomon features. 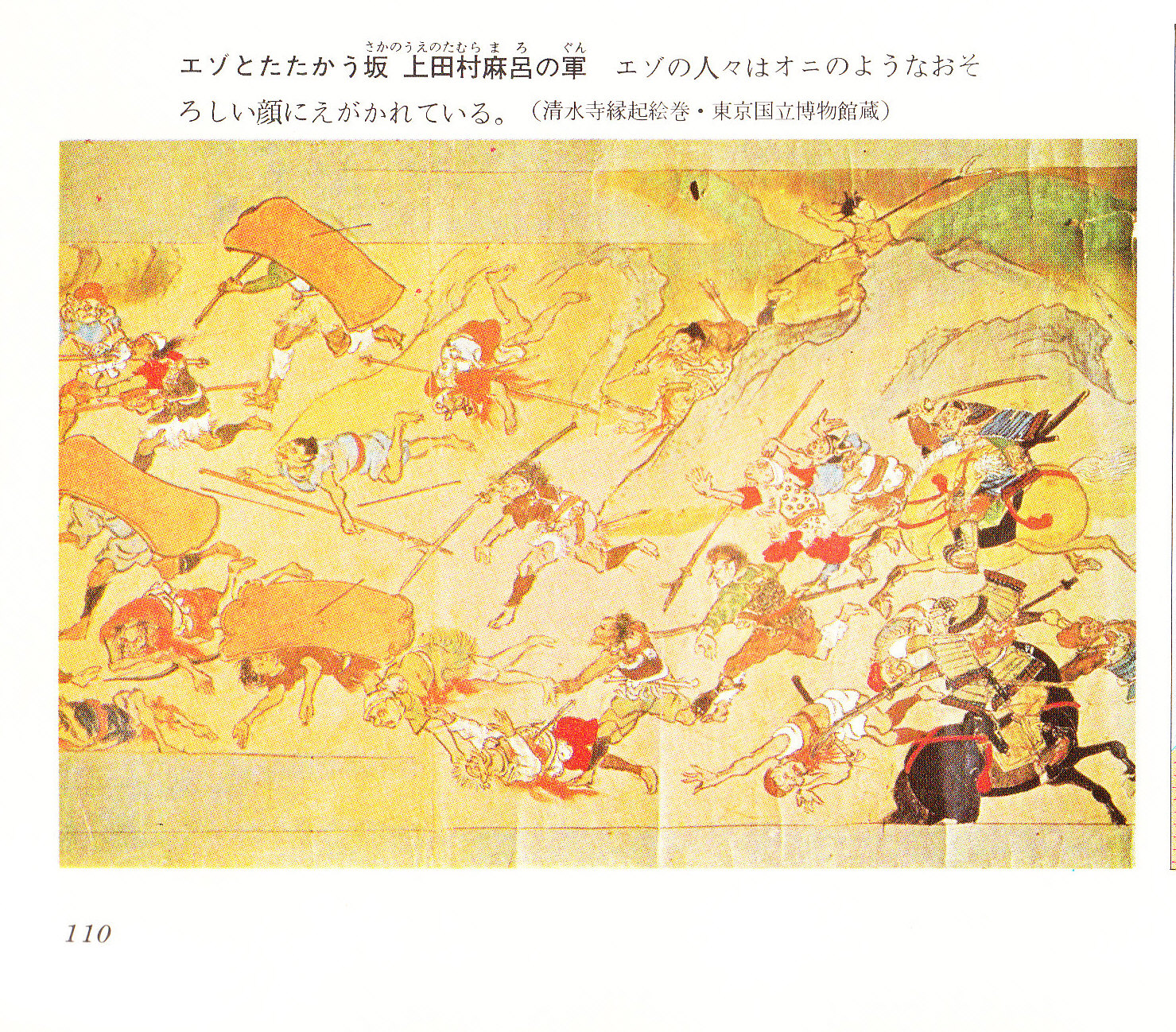 This is the standard illustration that is put into many Japanese textbooks on the subject of the Japanese conquest of the Emishi, here called Ezo, by Sakanoue no Tamuramaro. There are a number of problems with the illustration, and so I originally did not want to include it here, but there are some telling details that provide insight that needs comment. First, it was produced in AD 1517, during the Sengoku (or Warring states) period so it was produced far into the future from the time period of the subject and displays some very obvious anachronisms. Least of these is the armor of the samurai to the right who are equipped in the fashion of fifteenth century warriors. Interestingly, some of the Ezo are illustrated as wearing karako style armor--that is armor worn by continental armies influenced by Mongol and Ming styles--along with the Japanese domaru worn by the infantry of the Sengoku period. This mix in styles could well be a portrayal of contemporary Ezo who were encountered by the warlords in the north in Hokkaido. The biggest anachronism is the portrayal of the Ezo as foot soldiers. This was true of them in the sixteenth century but not in the eighth century. The Ezo are also portrayed as goblins and devils, not as humans, an ideology that seems to transcend the time period when this was produced. Whether in the eighth or the sixteenth centuries people on the periphery of Japan's control, particularly those living in Hokkaido in the sixteenth century, and those living in the Tohoku in the eighth century were variously seen as scarcely above animals. Finally, the Ezo are portrayed as being thoroughly destroyed by the Japanese, something that did not happen--in fact, quite the opposite occured during the eighth century. There is one truth that does come out of this image, something that is lost in the present, but was still prevalent in the sixteenth century: the foreignness of the people who lived in the north. Their culture was foreign, and they were seen as outsiders. (Image at Kiyomizu temple, taken from shintei gakushu kala-hyakuka 3 Nippon no Rekishi [New Color Encyclopedia 3 Japanese History] Tokyo: Gakushu Kenkyusha, 1972 ).