Origins of the Jomon

The Ainu are in a way a window into ’s prehistory. They are closer osteologically to the Jomon ancestors than any other living population in . They also give a clue to past populations such as the Emishi, and are thus very important in understanding the possible transition from a Jomon based population to a Yayoi based population--that is, the changeover from a mainly Austronesian (related to the Australian Aborigine) to a modern East Asian population. We will examine the possible relationship of the Jomon to the Austronesian, and also some questions about the Jomon and their place in ’s prehistory.

According to Matsumura (1999:36-40), reflecting current physical anthropology, the Ainu and Jomon tooth pattern falls into the category known as the Sundadont. The front teeth are smaller and lack a “shovel” indentation on the back, and the molars have a particular pattern. In contrast, the Yayoi tooth pattern falls into the East Asian pattern known as Sinodont. These display “shoveled” front teeth, and molars that differ from the Sundadont.  The front teeth are markedely larger and more robust than they are in the Sundadont. The Jomon tooth pattern is similar to the Australian Aborigine. Thus it has been concluded that the ancestors of both the Australian Aborigine and the Jomon were at one point the same. When they split apart is not known, but it is currently believed that the split occurred some thirty thousand years ago in southern , and would account for the differences that emerged between the two populations. The Aborigine is generally dark skinned while the Ainu are lighter in complexion, however, photos and pictures from the nineteenth century show an unmistakable resemblance between some members of the Ainu and the Australian Aborigine. Some Ainu-e from the eighteenth century show darker skinned individuals though generally lighter than the Aborigine. Even on this point the degree of skin tone varied among Aborigines. The differences can be attributed to thousands of years of independent development of the population in and in .

The Aborigine is characterized as a race apart from Caucasian, Negroid and Mongoloid, and is sometimes characterized as a population that had characteristics of all three groups, and perhaps forms the base from which the Caucasian and Mongoloid groups differentiated from each other. They are thus seen as representative of a very ancient ethnic group that is as yet undifferentiated into modern races. In terms of the Ainu who have been unclassifiable this relationship with the Australian Aborigine makes a great deal of sense. However, it has only been in recent years when this relationship has been confirmed in a scientific manner through the examination of tooth patterns.

The Jomon are thus seen as being a group that is related to the Australian Aborigine who adapted themselves to the Japanese archipelago. This answers a fundamental question about their possible origin but also raises some thorny questions. Matsumura’s data also shows the tooth pattern relationships between different East Asian groups and different Austronesian groups.  Interestingly, Native Americans fall into the Sinodont tooth pattern, but not the Sundadont tooth pattern. This would lend weight to their possible migration from over the Beringeria land bridge during the Ice Age.  Also confirmed in this is the historical progression of the Japanese population away from the Jomon as the modern age approaches. For example, Kamakura Japanese in the Kanto had more similarities to the Jomon than those from the era.  The thorny issue has to do with the Ainu. According to this analysis Kanto Japanese in all historical periods are closer to the Hokkaido Ainu than the latter are to the Sakhalin Ainu.  In other words, despite the geographical closeness of to , and despite having close cultural ties, physically, the Sakhalin Ainu are dissimilar to the Hokkaido Ainu, and are more removed from them than the Kanto Japanese. This maybe a reflection that the Amur people who are most typically East Asian settled in historically, though their culture became Ainu. This brings up very important evidence that just because cultures can be similar or even the same, the ethnic groups that share that culture can be dissimilar.

Most importantly, these studies also confirm the Transformation theory of Japanese population history. This theory posits that the Japanese population changed gradually from a Jomon based Austronesian population to a Yayoi based East Asian population. For example, the earliest Yayoi of northern is closer to the Jomon population than the Kofun age people. If there was an abrupt invasion of East Asians that began in the Yayoi age then one would expect that the incipient Yayoi groups to be contrasted from the Jomon. This confirms what has already been discussed on another page regarding Kidder’s findings of the similarities of Jomon and Yayoi skeletal remains in .

However, an unanswered question is whether the first Japanese speakers were East Asians who had come from the mainland and did indeed contrast from the Jomon inhabitants. For example, the Nihon shoki does speak derisively of natives as “earth spiders” that are dehumanized and killed without provocation. This could only happen in a situation where the population looked and behaved very different from the invaders. It is hard to dehumanize people who look the same, only those who look very different. We cannot simply equate the Yayoi culture with Japanese speakers even though most of the people who practiced Yayoi culture, namely settled rice cultivation, were areas where the Japanese conquered and settled. However, this is not always the case. The incipient Yayoi culture of the Tohoku and were carried by Ainoid ancestors.

The evidence seems to point to the Transformation theory with one caveat. The place of Japanese speakers and of Yamato is still undetermined, and may point to a definite East Asian based state that killed off local Jomon inhabitants particularly in western Japan, except when this was not possible where the local Jomon population was too large such as in southern Kyushu, the Kanto and northeastern Japan. The population in these areas changed gradually over time. 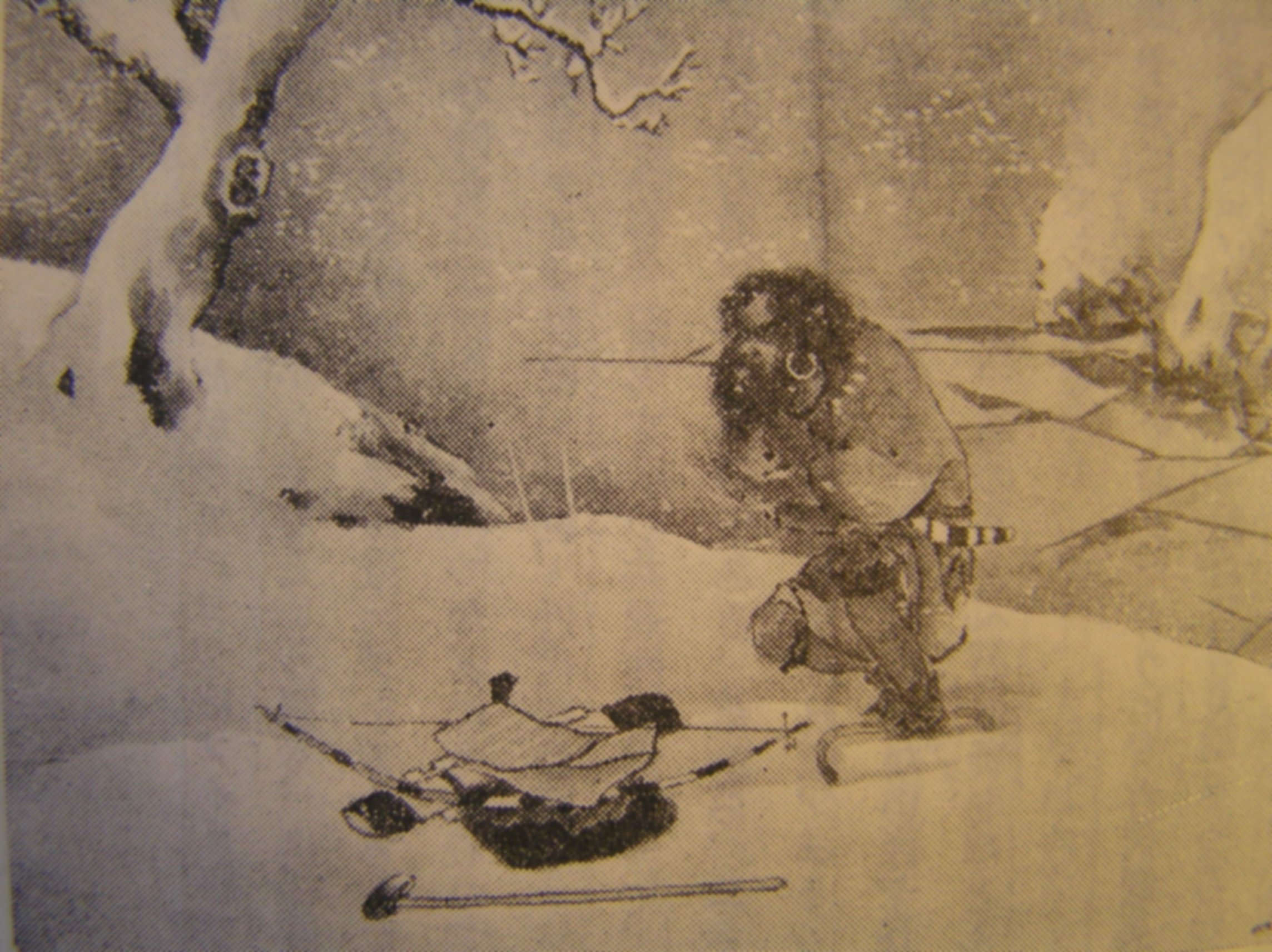 Ainu hunter in winter clothing consisting of deerskin hide armed with a bow and short dagger (tashiro). An arrow case lies under the bow.  A tool lies next to the bow which may be a mallet. This hunter is virtually unchanged since the Jomon time period except for the metal tool head and steel dagger (1993:55),

Jomon Culture and the Emishi