The Moving Frontier: From Emishi to Ezo

The change from the reading Emishi to Ezo took place in the middle of the Heian period. At this time the central government and its agents had extended the authority of the Yamato ritsuryo state into most of the contested lands in the Tohoku that had been held by the Emishi forces during the wars of conquest of the eighth and ninth centuries. This change coincided with the marked change in government from one which was dominated by the centralized "Emishi" states that had evolved after the wars of conquest, and ended with the fall of the state of Hiraizumi, a northern Japanese state that was ostensibly ruled by descendants of the fushu.
The name Ezo was given to those still independent tribes north of Iwate prefecture, and those who lived in Hokkaido, clearly people who were the ancestors of the Ainu. Did the change in reading coincide with a change in the type of people the word referred to? This is where many scholars have been unable to come to a consensus, and the answer to this question is vital because it links the Emishi with either the Ainu or the contemporary Japanese. I present arguments for and against the link. A theory is proposed that ties the disparate facts together.
As I have written in other essays, the link is compelling because of mainly three strong pieces of evidence which I will summarize here as I believe I have already mentioned them elsewhere. 1) The kanji characters that make up the word that describes these people had not changed even though the reading had changed. Most important, the physical description of the people did not change from the AD 642 description of the Emishi proper to the Ezo ancestors of the Ainu. There is no indication that as the reading changed we are dealing with a different people. The only indication is that the frontier between Japan (defined here as the Yamato state), and the Emishi had changed from the Miyagi prefecture to Aomori prefecture. 2) The geographical names in the Tohoku reflect Ainoid names, and the Emishi did not speak a Japanese language as interpreters were needed between them. 3) The only real difference between the earlier group and the group that inhabited Hokkaido had to do with economics, the former leading a more sedentary life centered on intensive agriculture, and the latter relying more on hunting and gathering with limited dry agriculture.

The points against a link are as follows: 1) The bones of the Emishi rulers of Hiraizumi were studied and had more physical similarities with Japanese than they did with the Ainu. This one point has been raised by numerous scholars to cast doubt on the ancestry of the Emishi as a whole despite its very limited focus on one group of rulers who were arguably Japanese to begin with. 2) The very difference in the economy and society of the Emishi and the Ezo in Hokkaido with very different styles of warfare, one centered on horses, the other on infantry, and one centered on more intensive rice agriculture, the other based more on hunting with limited agriculture. 3) Evidence of skeletons recovered from the Tohoku and Kanto regions, the kofun type, midway between modern Japanese and the Ainu that would seem to cast doubt on a simple either, or scenario in terms of the ancestry of the Emishi.
The main problem with more modern revisionist accounts is that it fails to account for the separate identity of the natives of ancient Tohoku. If they were Japanese colonists (or of the same ethnic group) who sought independence from central authority how can the cultural and linguistic differences from other Japanese be explained? These revisionist accounts also speak of the separation occurring with the reading of Ezo, that is, once that reading gained currency as a description of the natives of Aomori northwards, suddenly, it is interpreted to mean a people with a distinct culture and language separate from the Japanese. However, centuries before the eleventh century when the ezo reading became current the people of michinoku as the Tohoku was called were seen as a separate people and even a separate state outside Japan.  Direct evidence is in the stone stele erected at Taga Castle in 762 that gives distances to what were considered different countries at that time.  The Emishi country is mentioned here along with other foreign lands outside of Japan such as Matsukatsu country (which probably referred to Bokkai in present day Siberia near Vladivostok).

After further studies have come out in the past few years since I first wrote this page, the linguistic difference is perhaps the strongest argument that ties the earlier Emishi with the later medieval Ezo of Hokkaido.  If these Emishi were related to Japanese they would have spoken some dialect of Japanese and they would not have needed translators. The other fact that has emerged since the last revision is that there are traces of a language called matagi left over in the forested hinterlands of Iwate and Aomori prefectures that is being used as a ritualized hunting language, and this language clearly has affinities to Ainu.  We go beyond historical place names here to find a trace of a living Ainoid language still used in the Tohoku under circumstances that tie into a hunting gathering lifestyle which was practiced by the Emishi.

On the other hand, other studies have pointed out the inescapable conclusion that the population in these areas changed much earlier than anticipated. Change from the Jomon population to a more Yayoi population proceeded earlier than once thought.  It maybe that there were Emishi groups whose ethnic make-up was similar in many respects to other frontier Japanese groups.  Here physical anthropology has shown this to be the case. This means that Japanese migration into the Tohoku was much more widespread and started earlier than the formal conquest of the area by the central government.  The line between contemporary ethnic Japanese and ethnic Emishi may have been blurred in areas of central Tohoku where the Tohoku Wars began.  However, what must be kept in mind is that contemporary Japanese of the area were different from modern Japanese and were somewhat closer to the Jomon ancestral population than they are today. In one sense this verifies a part of the revisionist scholarship that the distance between contemporary Japanese and Emishi on an ethnic level in the central Tohoku region was not great.  In the northern areas of the Tohoku the difference was greater, but as yet poorly understood. 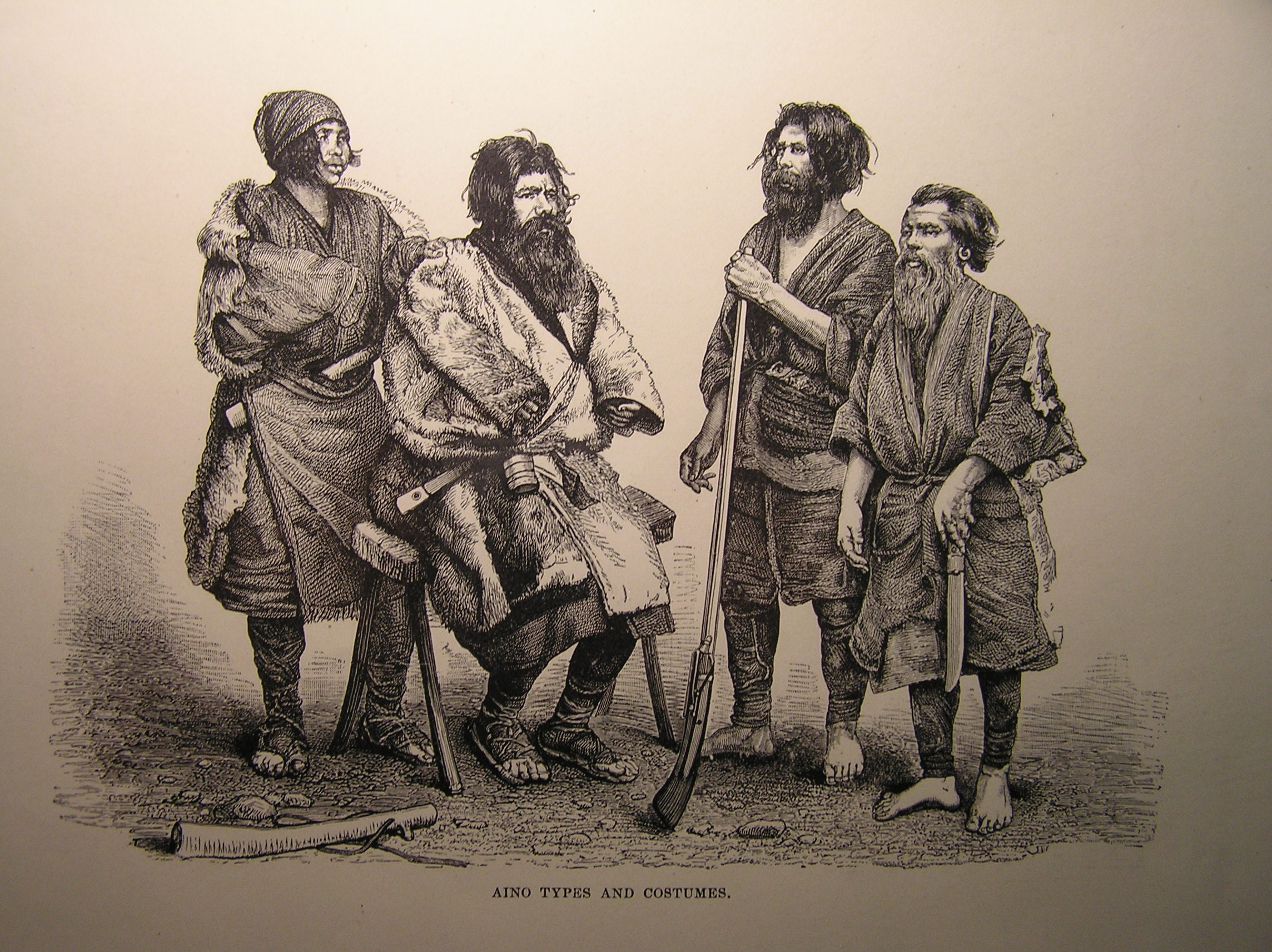 A nineteenth century engraving of Hokkaido Ainu showing the fur clothing that was typical for the northeast Asian cultural area common to the Ainu in Hokkaido, the peoples of Sakhalin and the Amur river valley. The two men to the right are wearing Japanese-style clothing. The young man behind the seated figure betrays features that are more Austronesian than the others, two of whom look strikingly northern European.

Much earlier, during the Nara and early Heian period, the Tohoku (northeast as a whole was seen as the frontier in the same sense. That is, the area was described as michi-no-oku or "deep road" meaning an area that lay beyond Japanese culture, ethnicity and norms: an area that lay outside the known world. It was considered to be foreign territory when Taga fort was constructed close to what is now in 724 as a frontier outpost of , to the Matsukatsu, a sinified Tungus power, that controlled the Amur river trade, and to the Okhotsk of Sakahlin and . The fur trade flourished in this region at the time, but its culture contrasted from the Japanese who were more influenced by the Korean and Chinese states to the south.

By the Early Modern period the Ezo in had become sharply contrasted to the Japanese on the main island, but this was not always the case. This of course has lead to the reification or static view of both societies that does not seriously take historical change into account. Truth be told, there were two cultural directions that met, struggled and contested what became , one influenced by a northern cultural tradition that was influenced by native peoples of , and the Amur river valley. The other, Yamato, was influenced by the centralized states of Korea and China. The winning side eventually became the Japanese state. However, we cannot forget the shadow of the past when a competing people and culture held sway in northeast Japan, one that was as different from what came after as can be imagined.

The Emishi: What Anthropology Tells Us
The Northern Frontier: Old photos from a Czech collection
Back to Main Menu