Emperor Kounin sent an army force to Michinoku and Ideha as his last work. Fujiwara no Tsugunawa, a Middle Communicater in the cabinet, was appointed to the Grand Delegate of Conquering the East (Seitou Taishi), but  it may have been only a nominal appointment. Tsugunawa perhaps stayed in the capital Nara. Vice Delegates (Hukushi) were Ootomo no Masutatsu and Ki no Kosami.  Masutatsu rendered a distinguished service by building Momunohu Castle.  He was given a command sword so we know he was the real commander general of the expedition army. Kosami was cousin of Hirozumi, who had been killed in Korehari Castle. Besides them, Abe no Iemaro went to Ideha as the General of Ideha Pacifying North Barbarian (Ideha Chinteki Shogun).

The Japanese army entered Taga Castle in May. The situation was worse than they expected. Japan could not advance into the frontier area.

The Emperor was irritated by the delays of the army. Government consolidated its western defense against Shiragi as a precaution. Vast provisions and one-thousand suits of armour were sent from the east countries by request of Masutatsu.  However, no battle report came out of Michinoku.

The Grand Delegate was changed to Fujiwara no Oguromaro on September 23. Oguromaro arrived into Michinoku to grasp the high command over Masutatsu.  The Emperor scolded the Grand General on October 29 supposedly recorded in the following manner:

It has been a long time since the general's departure. You reported several times that you would enter rebel's land with a few tens of thousands of infantry and cavarly force, so I have thought the army has advanced already and struck the mad rebels. However, this report says you cannot fight this year. In summer due to thick grass, in winter for lack of fodder, you have used words skillfully to stay in the end.  It is general's work to align soldiers and to pile provision, but you were not prepared well. What is month and what is date when you strike rebels and restore the castle? Now, still before November you can use force.  But you have never entered [enemy country], disobeying emperor's command. How do you confront enemy if all men and horses are exhausted? Why is the good general's strategy like this? If you do not enter the rebel's land this month, stay in Taga and Tamatsukuri, make effort to defend it and work out tactics [to attack].

Oguromaro was not the general 'in summer', but he commanded the army to continue battles in the north during winter. On December 12, a force of two-thousand Japanese soldiers conquered five roads of Washiza, Tateza, Ishizawa, Oosugaya, Yanagisawa (all are presently unknown and perhaps unimportant places). On December 27, Kudara no Konikishi Shuntetsu, the Vice General of Peace Guard, was surrounded by the enemy, but saved his own life by breaking through the enemy's line.  The Japanese army used only about one tenth of their total strength in this offensive operation.  It is conjectured that most of the Japanese forces were dispersed to different forts. This was not a ''good general's strategy," even if they felt anxiety about their low mobility.

In Ideha country, general Abe undertook a strategic front change. The main forces were moved from Akita to Okachi further east.  Ideha country office was moved to Kawanobe. Shirasu and Unako, the Emishi of Akita, said to the general ''We relied on official force and have lived under the castle for long time. Is this Akita castle abandoned at last, now and forever?'' Abe offered to station soldiers on a rotating basis in Akita castle, perhaps of corp strength. The government replied:

Akita castle was built by a consultation of generals of a former generation. Many long years have passed in defending against the enemy and holding people. To discard all on a morning is never a good plan. You should place some soldiers (perhaps an expedition army) and station them there in defense. And let a delegate, or a country high official engage in full-time administration.  Do not disappoint their feelings of rejection.  Fort Yuri occupied a strategic point for rebels and held the road to Akita.  Let soldiers dispatch and support each other to defend.  But country office reported in early Houki age ''to hold Akita is difficult, to rule Kawanobe is easy." Opinion of the time jelled into placing [the office] in Kawanobe.  However, many years have passed and the movement has never taken place. It was clear because [the local] people hoped they would not move. Think over this judgement well and consult the Emishi people over again, then report their interests in light of ours. 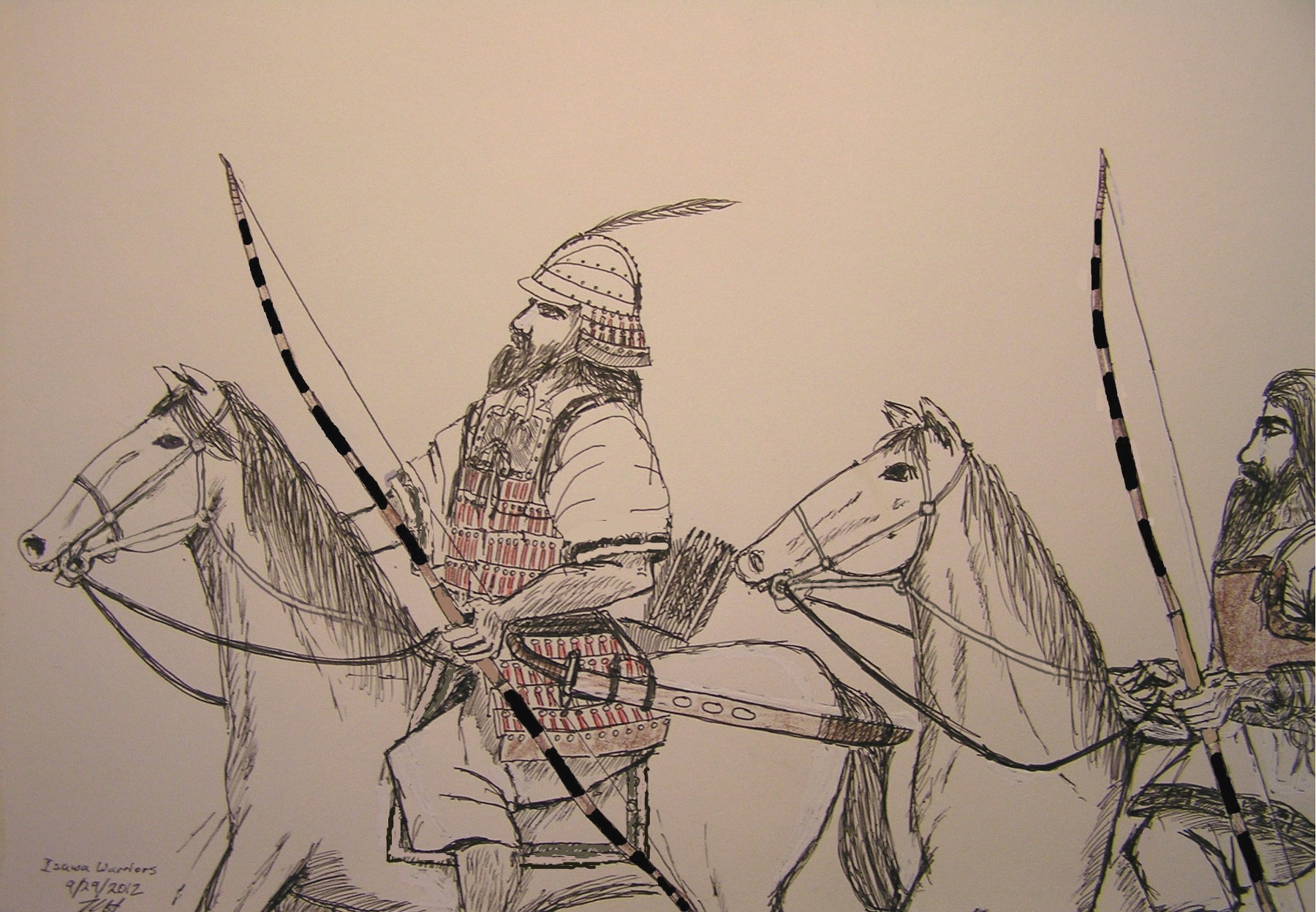 Isawa warriors ride to battle the Japanese forces. The swift horsemen of the Isawa could gather and attack much faster than the forces of the Japanese could defend. This leader on the left wears keiko that was given to him through his service to the Japanese government. The helmet is modeled on an actual one recovered from an Emishi burial site near present day Morioka. He has a large warabite-to sword. The warrior to the right is not armored except for a leather tanko. Many Emishi did not have metal armor.  However, much of the armor was also taken from Japanese captives and fallen soldiers during battle.  The bows were lacquered with alternating black and reddish bands to both waterproof and strengthen, a technology that was known from the Jomon period.  The clothing reflects a pre-Ainu design with simple bands and Epi-Jomon motifs on the borders of the textile.  The keiko reflects Ainu armor, virtually unchanged from Nara armor from which it was modeled.

In May of the following year, the time for cultivation came.  The soldiers had fought for a year away from their homes. So the generals released the soldiers from their mobilization and returned to the capital city (Kyoto).  Ootomo no Masutatsu became a target for emperor's anger. "...Masutatsu faces army and often failed the timing of attack, [he] stayed and never advanced.  He prolonged days and months with unnecessary costs in army provisions.  Therefore [I] send Fujiwara no Asomi Oguromaro.  Soon after arriving [on the front], he advanced and restored the lost strongholds."

In first reading this, the impression is that Korehari Castle was included in the restored 'lost strongholds'.  But we cannot find the existence of its function in successive events, though its location was crucial for the war with Isawa. The Michinoku country office reported the activity of Korehari 'rebels' after nine years. There is a possibility that Oguromaro's troops reached Korehari, but they had never consolidated it.

After a year of conflict, Michinoku evaded being taken. Japan estimated the Emishi's total force at more than four-thousand. The Japanese army killed more than seventy enemy in this campaign. According to the Japanese Government:

The nature of the Emishi is to swarm like bees, to gather like ants, and to make a disturbance. When we attack they escape to the mountains or bush, when we leave they invade castles.  And Isaseko, Morokui, Yasoshima and Otoshiro are heads of rebels and equal to a thousand [men]. Though they escaped to the mountain or field and looked for chances and weak points, they feared our army force so they cannot poison (?) freely.

The Emishi and their tactics were stronger than the Japanese army's. The Japanese government recognized this was not a victory but a stalemate. The Emperor thought that a more overwhelming force was needed.  But rest and recovery of the exhausted resources and men from the eastern countries was required.

The countries of Bando (current Kanto), Michinoku and some districts of Ideha were exempted from the tax burden for three or four years. The government made an effort to keep up the quality of the soldiers.  They endeavored to recruit young men from the local rich (or influencial) landowners rather than from peasants with low morale. In Enryaku 2 (783), the government blamed the corruption of high officials in past war efforts. The former Emperor Kounin had lived a great deal of his life as a collateral of the royal family.  Kan'mu reached manhood as a lesser noble than his father. Probably he had observed the effects of corruption in the government. Though his rule was praised as an ideal in later history, the success of his anti-corruption measures was not entirely successful.  Yamato rule, which officially governed in behalf of the people in reality exploited the people on behalf of the court aristocracy.