Ootomo no Sukune Yakamochi (Juu 3i rank) was appointed as the General of Conquering the East (Seitou Shogun) in Enryaku 3 (784). He went to Michinoku with Vice General Hun'ya no Mahito Yoki, but a large mobilization was not enforced at the time. Yakamochi passed away while preparing the army for offensive action.  In Enryaku 5 (786) the court sent inspectors of troops and arms to Tosan-do and Tokai-do, the two main roads that lead from the capital.

In March, Enryaku 7 (788), the government declared the mobilization of more than fifty-two thousand eight-hundred soldiers to be sent along with provisions to Taga Castle by the following March.

Ki no Asomi Kosami (Upper shou 4i rank), the Vice General of the former expeditionary force, was appointed as the General of Conquering the East. He had held many important posts: Counselor of the cabinet, Secretary of East Palace, and the Middle General of the Interior Guard.   Iruma no Sukune Hironari was selected as the main Vice General under Ki no Asomi Kosami.  Tajihi no Mahito Hamanari, Ki no Amomi Mahito and Saeki no Sukune Katsuragi were also selected as Vice Generals.  In Michinoku, Vice General of the Peace Guard Ikeda no Asomi Mahira and Abe no Sashima no omi Suminawa were waiting for the forces to arrive.  The Emperor gave Kosami a command sword in December, and wrote a letter recorded in the following manner:

To select a day to appoint the general is according to the Emperor's word. To go on the expedition is the mission of the general. I hear, that it happens in many situations, that lower commanders do not observe the military command. The reason is that they underestimate the law. If the Vice General commits a crime, you should arrest him and report it to me. [You can] enforce the death penalty which involve military directors (gungen) or lesser officers [if they commit a crime].  Security of Bando rests on this action. You must make every effort [to enforce this directive].

Japanese army began its mobilization the following Spring. On March 28, the army camped beside the Koromo River (Koromogawa), perhaps inside   the Isawa boundary around the neck of the Kitakami Basin. The army crossed the river and built three camps.  The camps were placed like a triangle (literally 'feet of Kanae'). Many insist that this means three units camped across the river from each other, but I think it is not necessarily a correct interpretation. To cut off mutual support between units is irrational. The army remained inactive in this position for a few months.

Meanwhile, the Emishi concentrated their forces on the east side of the Kitakami River.  The Japanese commanders thought they did this because they were protecting the center of Isawa territory.  The Japanese camped on the west side, so their plan was to cross the river.

In June, general Ki no Kosami commanded the offensive operation. The main unit consisted of four-thousand troops, composed of detachments from the Center Army and  the Rear Army and advanced on the east side of the river (see map below). The Front Army advanced on the west side of the river, and would cross the river on the north and planned to combine with the main unit.  The commanders of these units were not lead by the Vice Generals, but by lower ranking officers.

The report of general Ki no Kosami in Shoku Nihongi is reported as follows:

When the unit approched the home of the rebel leader Aterui, about three-hundred rebels (Emishi) appeared, so we fought against the enemy. The strength of the official army was strong, and the rebels retreated and escaped.  Fighting and burning, the official army reached Subuse village, and tried to combine the forces. The Front Army could not advance across [the river] due to the rebels.  At this time more rebels of about eight-hundred came and fought to block [the main force]. Their force was very strong, and the official army retreated a little, and then the rebels pressed their assault.  And then more rebels of about four-hundred came from Higashiyama and cut off the rear of the official army.  We engaged the enemy from both front and rear as the rebels soldiers encouraged themselves.  The official army was driven out.  The Commanders Hasetsukabe no Zenri, Shinshi Takata no Michinari, Aizu no Soumaro, Asukabe no Yoshitari and Ootomo no Isotsugu, all died in battle. The number of rebel villages burned was fourteen, about eight-hundred houses, machines and items were in additional report (or 'not counted here'... the author cannot interpret the meaning). The dead in battle of the official army was twenty-five, those wounded by arrows two-hundred forty-five, the dead from being drowned in the river was one-thousand thirty-six,  and those[soldiers] who swam and lost their armor one-thousand two-hundred and fifty-seven. The commander Izumo no Moroe and Michishima no Mitate led the rest and returned. 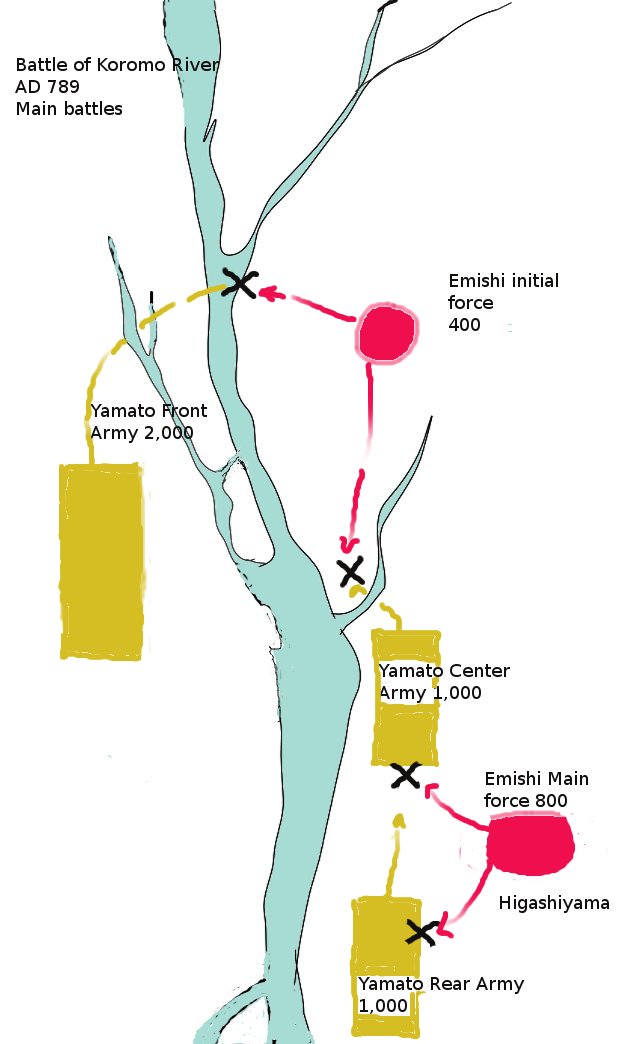 The trap of Aterui, the commander of Isawa, was very skillful because the center of the population of Isawa was not on the east side (as Japanese commanders believed) but on west side according to current archaeology. The Japanese lost most of their men to drowning. This was a stunning defeat, and ranks as one of the worst ever suffered by the Imperial Army.

The low death rate from actual combat is clear in this record.  This was due to heavily armored infantry fighting against archers. The Emishi arrows were not able to penetrate the heavy armor so there were many wounded, but few deaths.  However, the heavy armor directly contributed to the many deaths due to drowning. The record also indicates the numbers of those soldiers who took off their armor because armor was very expensive.

Despite this defeat, Vice General of the expedition army lead by Tajihi no Hamanari achieved some success on the other front, though the details are unknown. In total, it was confirmed that eighty-nine Emishi rebels died in comparison to over 1,000 Japanese dead and nearly 2,000 wounded from the official army. Ki no Kosami returned to the capital city on September 8.  Emperor Kan'mu blamed that generals, that they had never led the troops themselves, and that the unit had lost its timing in offense.  Ki no Kosami was forgiven because of his past service, however, Vice General of the Peace Guard, Ikeda no Mahira lost his crown (official rank) and post, Abe no Sashima no Suminawa lost his post.

The Isawa Emishi had defended their homeland successfuly.  Aterui has become a legend due to this victory.  Despite this victory, the Isawa Emishi did not have the capacity to make a frontal attack on the existing Japanese forts.  Though the Japanese officials insisted that the Emishi could retreat any time they felt like it, they did suffer heavily from the "scorched earth" tactics of the Imperial Army because Isawa's people were already dependent on agriculture.  Indeed, one of the most successful policies that the army used was to give rice and cloth to the Emishi of other areas in exchange for their allegiance in order to isolate the Emishi of Isawa. 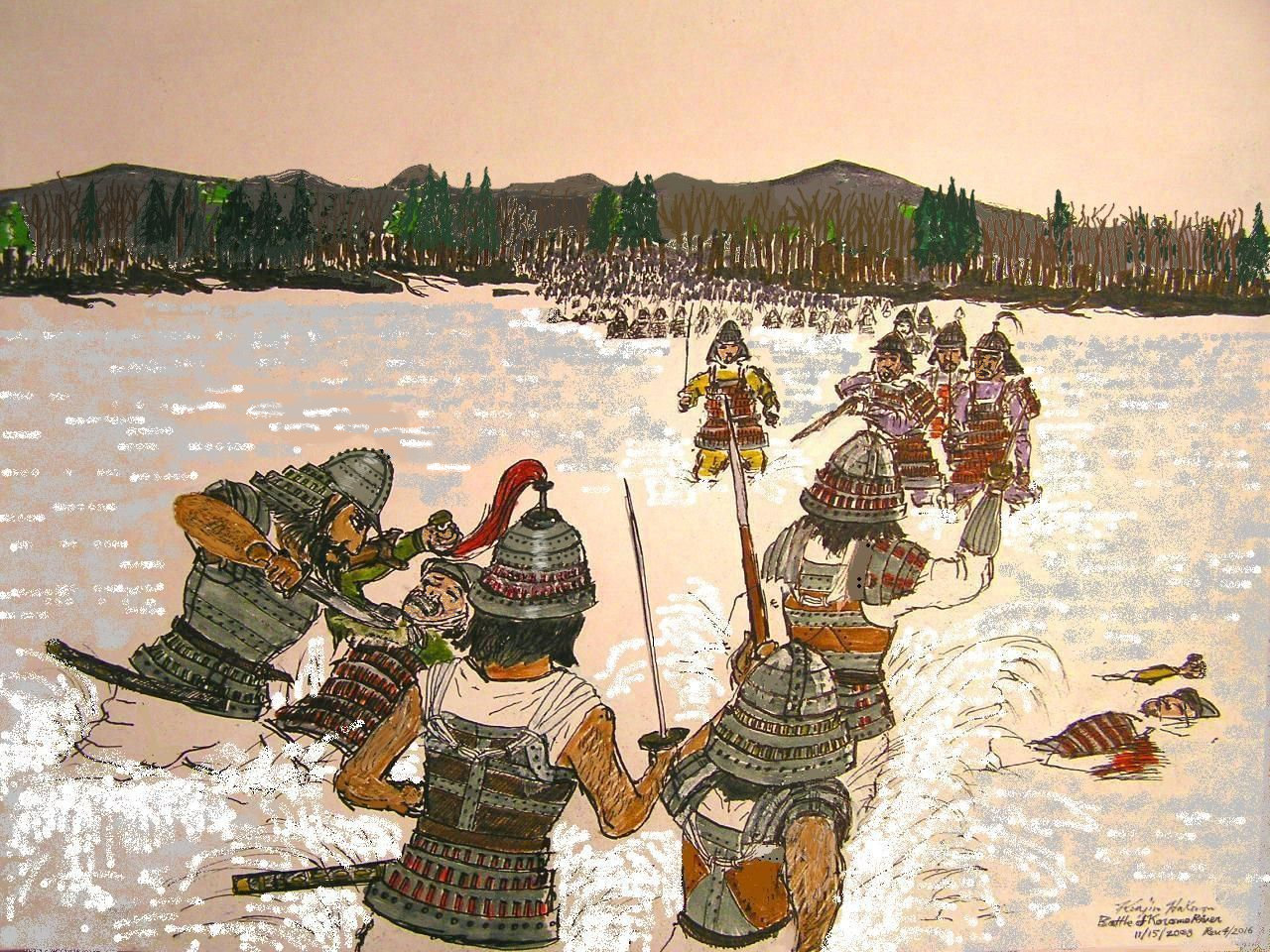 In one of the key episodes of the battle of Subuse a group of four hundred Emishi contested the crossing of a force of two thousand Japanese soldiers of the Front Army moving east across the river.  This initial Emishi force effectively stalled the Front Army from crossing the river, and enabled a larger force of eight hundred Emishi to attack the main force and prevent the Front Army from combining with the Center and Rear Armies (see map above and illustration on main page).  They cut-off the retreat of the Center and Rear Armies and pinned them against the eastern bank of the Kitakami river.  This caused a general panic to ensue among the Japanese forces, and many stripped themselves of their armor and threw down their weapons in an attempt to swim across the river resulting in over a thousand drownings. The Emishi are shown wearing various kinds of tanko armor combining leather reinforced with iron (two foreground figures and figure on the right) and iron tanko (left figure).  The Japanese forces are wearing mainly keiko armor, and many of these were discarded in their retreat and were recovered by the Emishi. The revision (2016.4.29) is similar to the main page, that by the seventh century in kofun Japan (lasting into the eighth century in Emishi territory) the helmets made of vertical strips of iron (common 5th-6th centuries) are replaced by ones made of overlapping horizontal bands riveted together, and in many cases reinforced by a vertical band over the crown of the helmet. Whenever a vertical band is utilized a crest is absent.