In Enryaku 10 (791) the court government sent three persons to inspect the soldiers and arms for the next expedition.  These three were Kudara no Konikishi Shun'tetsu, Sakanoue no Oosukune Tamuramaro and Fujiwara no Asomi Mawashi.  On July 13, Ootomo no Asomi Otomaro was appointed Grand Delegate of Conquering the East (SeitouTaishi).  The post was renamed Delegate of Conquering East-Barbarian (Seii Taishi) after a couple of years.  The Vice Delegates were Kudara no Shun'tetsu, Tajihi no Hamanari, Sakanoue no Tamuramaro and Kose no Notari.  Kudara no Shun'tetsu had fought in Michinoku as Vice General and as General of Peace Guard for years, but he was passed over for some unknown reason in Enryaku 6 (787).  This year he was given one more chance to head a military post. Tajihi no Hamanari was permitted to serve on the former expedition.  Sakanoue no Tamuramaro was the son of a former Peace Guard General. He was promoted to a Near Guard (Konoe) officer.

Departure of the expedition command was set for November in Enryaku 11 (794).  But the real mobilization was on Enryaku 13 (795).  On January 1, the Emperor gave General Ootomo a command sword.  Though Hun'ya no Watamaro was said to have lead an expedition army of "one-hundred thousand" seventeen years later (the number is not very reliable) this mobilization is thought to represent the largest mobilization in ancient Japanese history.

The Isawa isolation strategy was already completed.  In Enryaku 11(794), one of the Shiwa Emishi, Isawa no Kimi Anushiko, wanted to submit himself to Yamato rule. He asked permission to sweep out the Korehari Emishi because they blocked the main route to . He was given the title of 'Isawa no Kimi'.  Kimi was a title given to influential independent Emishi from the court, and was used by the latter to integrate independent Emishi as allies of the court.   Anushiko lived in Shiwa, but he was a commander in Isawa's army.  In the same year, Nisami no Kimi Awaso and Ukame no Kimi Oga wanted to submit themselves to the government.  The government welcomed them in the capital.  The location of Nisami and Ukame is unknown, but perhaps they were located somewhere north of Isawa.

In the Nihongi Ryaku (Summary of Japanese Chronologies) it is written, "Vice General Sakanoue no Tamuramaro attacked the Emishi" in June.  On September 28, the court prayed to the shrines for the conquest of the Emishi, so the campaign continued.  General Ootomo reported the result on October 28.  They "killed four-hundred fifty-seven men, caught one-hundred and fifty, got eighty-five horses and burned seventy-five places."  The Emishi force at the Battle of Subuse was less than two-thousand.  We do not know the Japanese casualties, but this was not important for Isawa.  We can only imagine the effects on the Emishi population since they were not able to replace them easily.

Details of this most important Japanese victory were lost with the partial volumes of Nihon Kouki (Japanese Late Chronology), which was the official history for the period.  We know some details from citations in Nihongi Ryaku.  It was written there that the government forced the settlement (in Michinoku) of three-hundred and forty Japanese soldiers who had absconded from the army.  On August 7 Kudara no Shun'testu passed away.

I surmise that emperor Kan'mu must have believed that the (attritional) attack by a large force brought the final victory.  Perhaps he was correct, but his generals in the past were reluctant to take risks.  In Tamuramaro he found a general who did not hesitate to take risks, and press the war into enemy territory.

Sakanoue no Tamuramaro became the top military and administrative leader in Michinoku and Ideha.  He was appointed to the post of Supervisory Delegate of Michinoku and Ideha and Governor of Michinoku on January 25, Enryaku 15 (796).  He held the post of General of Peace Guard on October 17.  On November 5 in Enryaku 16 (797), he was appointed to the post, Grand General of Conquering East-Barbarian (Seii-Tai Shogun).  It was recorded in the Nihongi Ryaku, "there were Vice Generals" but did not cite any names.

Under his administration, nine-thousand people from nine countries settled in . Horse stations were established between Korehari and Tamatsukuri on November of Enryaku 16 (797). Many Japanese clans in Michinoku were permitted to change their names to better their status, and many military officers were promoted.

We have only a brief mention about the next expedition in Enryaku 20 (801), again because of the incomplete record of the Nihon Kouki.  This missing information is probably contained in the tenth volume of the Nihon Kouki. General Sakanoue was given the command sword on February 24.  Hun'ya no Watamaro wrote this as the "expedition army of forty-thousand.” On September 27, "Sakanoue no Sukune Tamuramaro and others reported. 'I have heard that... We conquered the Emishi rebels."  Tamuramaro returned to the capital ( ) in October. Emperor Kan'mu declared on November 7:

The Emishi of Michinoku had invaded the frontier and killed people for many generations. Therefore I sent (Upper juu 4 rank) Sakanoue no Tamuramaro Oosukune and others to let them subdue and clean up...

Soon Tamuramaro returned to Michinoku. He began to build in Enryaku 21 (802).  It was located at the center of Isawa Emishi territory. The government planned to settle four-thousand vagrants from ten countries there.  On April 15, he reported success.  Ootsuka no Kimi Aterui and Iwatomo no Kimi More surrendered with their five-hundred companions.

General Sakanoue went to the capital with Aterui and More on July 10.

He (Sakanoue) said to the government "This time we should let them return home as they hope, and invite their companion rebels."  But the court nobles replied, "Their nature is like hearts of beasts.  It would not stabilize [the territory].  This time we caught this owl leader (Aterui) by government's power.  To send them back according to their request is to feed the tiger and leave [potential] harm."  Then [the government] arrested the two captives, and cut them down at Moriyama in Kawachi country.

Thus the strong Isawa Emishi had been defeated and Japanese territory had expanded much further north.  Many of Tamuramaro’s measures succeeded.  Tamuramaro himself returned to Michinoku in Enryaku 22 (802), and built .  Perhaps, at about the same time, was moved further north.  Coastal horse stations in Michinoku were abandoned perhaps together with .  Instead, a new line of forts were established towards Isawa and Shiwa.  Provisions for the next expedition were sent to (location currently unknown).

The Ideha country office proposed to close the castle function of , and to form it as a normal district on November 22 in Enryaku 23 (803).  The government's reply was never recorded. Many historians regard this proposal was approved, but I prefer to leave the possibility of rejection, because much later castle was at the center of the revolt of Gangyou. Mainstream thinking is that the maintenance of a defensive facility and an armory had remained in these decommissioned forts, but we know that some forts and castles were actually removed, its base pillars taken out when abandoned.   I cannot believe that a frontier castle was left with many arms and armor without soldiers.

However, a dispute arose which changed the direction of the entire policy of conquest. On December 7, in Enryaku 24 (804), counselor Sugano no Mamichi and Fujiwara no Otsugu argued about 'Virtue Policy of Under Heaven (whole world)'. Old Sugano no Mamichi had been the main editor of Shoku Nihongi (Continuous Japanese History), and young Otsugu would become the main editor of Nihon Kouki (Japanese Late Chronology) after several decades. It is written in Nihon Kouki:

The Emperor's decree was issued. It ordered the Counselor, Right Head of Soldiers' Guard, lower juu 4 i, Fujiwara no Asomi Otsugu and the Counselor, Left Great Secretary, Lower shou 4 i, Sugawara no Mahito Mamichi to debate the Virtue Policy Under Heaven.  At that time Otsugu argued : "Now it was military and construction that caused the nation to suffer.  If we stop these two, people will be content." Mamichi insisted on the opposite argument [to continue on with the military mobilization] but Otsugu did not approve.  The Emperor decided that Otsugu's opinion was better and accepted it. Intellectuals heard this and most all of them admired it.

The military mobilization from the eastern countries was cancelled.  General Sakanoue was transferred to the Supervisory Delegate to Otsugu and the post of General of Peace Guard went to Kudara no Kyoshun.  Tamuramaro died after six years. Immediately after his death, Tamuramaro was described as follows:

"1.8 m height, 36 cm around the chest, eyes like the pupils of a blue hawk, and gold threads as whiskers--heavy one, was 201 kin (40kg), light one was 64 kin (12.4kg) (these were fake whiskers that were made of gold, fashionable at that time). When angry, his glare would cause beasts to fall down [dead]. When he smiled and loosed his brows, a little child would take to him soon."

On the other hand, Nihon Kouki wrote of him,

"Red face and yellow whiskers. His bravery surpassed [all] men.  He had an aptitude for [being a] general.  Emperor looked at him with favor.  He received the post of General of Conquering East-Barbarian in Enryaku 23, promoted to juu 3.  He had unlimited men who followed him on his trip (expedition), so it was hard to feed the men and horses, costing [much] for the people on the road. In Daidou 5, he was promoted to Great Communicator (Dainagon), held the Right Great General of Near Guard (U Konoe no Taisho).  He was often a frontier general, and performed well in each expedition.  He had the admiration of his soldiers, and got their full efforts.  He died in another house at Awata, sent juu 2 i. 54 years old."

He was remembered by Japanese as the most prominent military person until the beginning of the warrior government in the late 12th century. Also, he became a super hero in a fantasy story of the medieval age.  On the contrary, Aterui, his chief opponent, became a humanoid monster or devil, a caricature during later historical periods, cursed even by those who resided in the area he was originally from.  This shows how effective Japanese propaganda was regarding the Emishi War.  Ironically, today, there is no doubt about Aterui's tactical ability as a great general, fighting with telling effect against a numerically superior opponent, but we lack information to really judge whether or not Sakanoue was a great general. 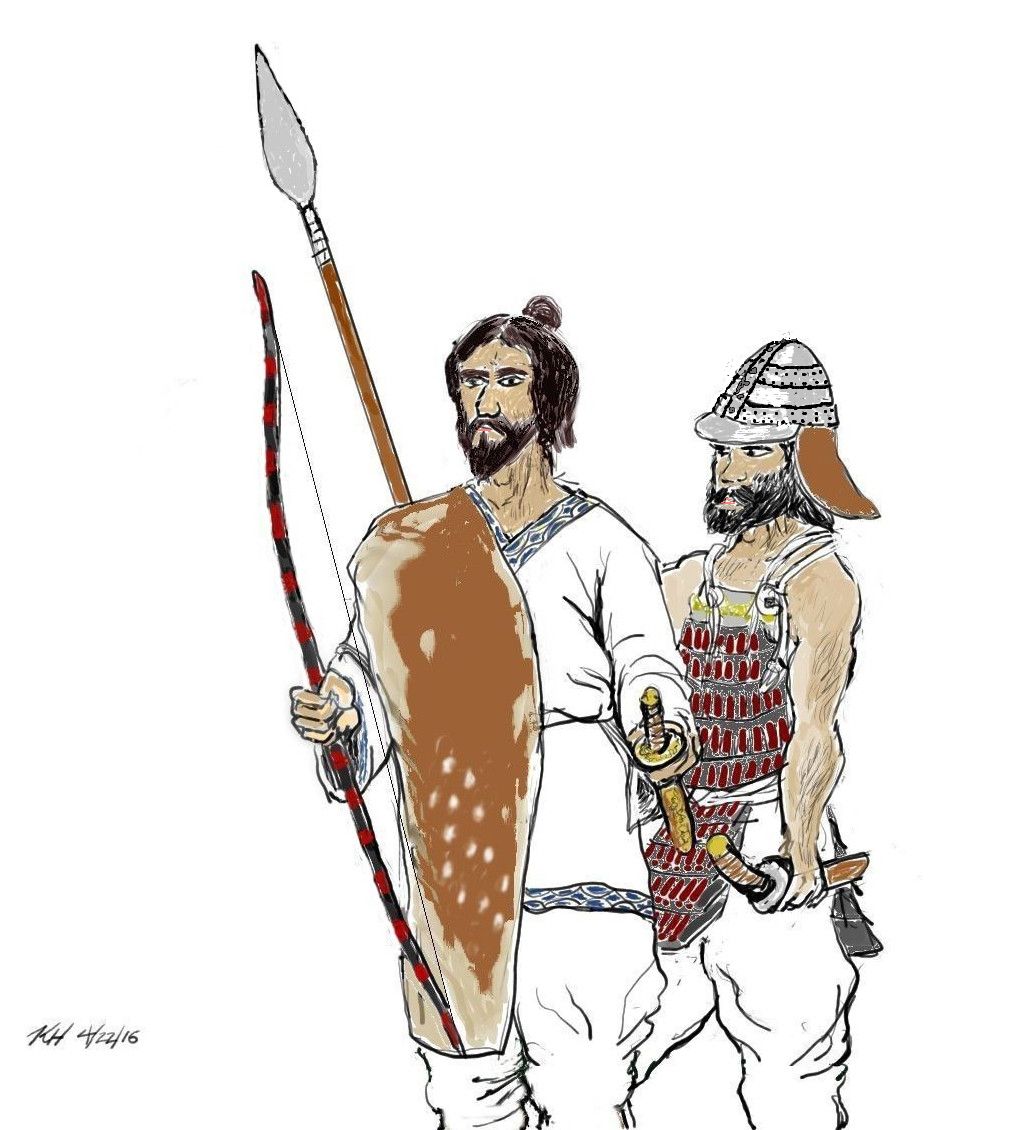 The Emishi general Aterui is shown here with an attendant. I interpret him as fully within the tradition of his people as a great Jomon leader who forged alliances with different Emishi groups in the Hitakami basin.  As such he wears the acroutrements of what is the pre-cursor to the Satsumon culture complete with clothing that would later become characteristic of Ainu design, the Emishi deerskin and the elaborately designed wara-bite sword scabbard and typical Jomon designed laquered bow.  Though his clothes are influenced by Yayoi culture in material this picture shows someone who is culturally very different from Japan's Yayoi.  He wears his hair in the typical Jomon fashion that also influenced later samurai hairstyle.  He also has dark brunette hair not uncommon among the Ainu and their ancestors.

Battle of Subuse | Conquest of Emishi