Building the Fort Line in Michinoku

The beginning of the long war between the Japanese government and the Emishi coincided with the construction of the fort line in Michinoku.  Many Japanese began to settle in the territory where the Emishi lived, and the Japanese government encouraged the latter to live like other Japanese. Modern archeology has verified that in areas where the Emishi resided agriculture was practiced, therefore, the older view that the Emishi were only hunter-gatherers is no longer valid. However, the late Jomon lifestyle, reflected among the Emishi, was not the same as the Japanese: they practiced more hunting and gathering with less reliance on agriculture. That is why the official contemporary government policy regarding the Emishi was to curtail their reliance on hunting and to force them to live like other Japanese subjects, as taxpayers subsisting on agriculture.

There existed a crisis for survival among the Emishi as a unique people as result of these policies as they were incorporated into the Japanese ritsuryo state. The Japanese government was also realigning and breaking the existing power relations within the Emishi community.  Influential Emishi promoted their status vis-à-vis other Emishi by allying themselves with the Japanese government by becoming officials and participating in the bureaucracy not unlike how Germanic tribal leaders took on Roman Imperial titles during the Later Roman Empire. Other Emishi were not able to join the bureaucracy either because they had no connections or due to their antipathy to the Japanese. In Japanese this policy was known as "I o tsukate I o sei-suru (using the barbarian to conquer the barbarian)." It was no wonder that the Emishi rose in revolt as they saw their way of life threatened (see Emishi Fushu and Ifu for more details).

“On October 28 in Yourou 4 (720) Michinoku country reported that the Emishi rose up in revolt and killed Supervisory Delegate Kamitsukenu no Asomi Hirohito.” The next day the Government appointed Tajihi no Mahito Agatamori, Supervisory Delegate of Harima (Harima no Azechi) to Setsu Holding General of Conquering East-Barbarian (Jisetsu Seii Shogun), Shimotsukenu no Asomi Iwashiro, Vice Mayor of Left Capital (Sakyou no Suke) to Tajihi's vice general, and Abe no Asomi Suruga to Setsu Holding General of Pacifying North-Barbarian (Jisetsu Chinteki Shogun). This campaign lasted till April 9 of Yourou 5 (721) when the generals returned to the capital.

About this time, the Japanese promoted the fort line, settlement policy in the Michinoku area. Taga Castle was built in Jinki 1 (724) by Oono no asomi Azumahito, General of Peace Guard (Chin'ju Shogun). The exact time of his arrival in Michinoku is unknown, but he would command the forces in this area for the next twenty years as the highest official in Michinoku and Ideha. Taga Castle was built on a hill at the entrance of the Sendai plain and became the administrative and military center of this region. The previous Michinoku capital at Kooriyama was abandoned.

Frontier forts were established in the center of the Sendai plain: besides Taga Castle, Fort Tamatsukuri (former Nitori), Fort Shikama and Fort Niita were built about the same time. Towards the west of Shikama, Kami county was established with defense facilities. New forts were built inside of Japanese territory for several decades, but the migration of many Japanese settlers made a greater impact on the Emishi. The distance between the forts and the mountains averaged about 10 to15 km. This was probably too close to the mountains to prevent an enemy force from passing through the fort line via the mountains.

On March 25 in Jinki 1 (724), Michinoku country reported that the Emishi of the sea road (the coastal plain, see map south of Taga castle) revolted and killed Saeki no Sukune Koyamaro, the third official of the country office.  The government reacted by ordering a large mobilization of troops.  In April, all countries made armaments and supplies for delivery to Michinoku. The Minister of Formality Fujiwara no Asomi Umakai was appointed to Setsu Holding Grand General of Conquering Emishi (Sei Emishi Jisetsu Tai Shogun), and the Vice Minister of Palace Takahashi no Yasumaro was appointed to Vice General.  Thirty-thousand soldiers from nine eastern countries mobilized for war. On May 24, Ono no Ushikai went to Ideha as General of Pacifying North Barbarians (Chinteki Shogun).  Umakai's army suppressed the Emishi resistance successfully.  The general returned in November of the year. "Perhaps as punishment, seven-hundred and thirty-seven Emishi men were forced to move the following year to inner Japan. 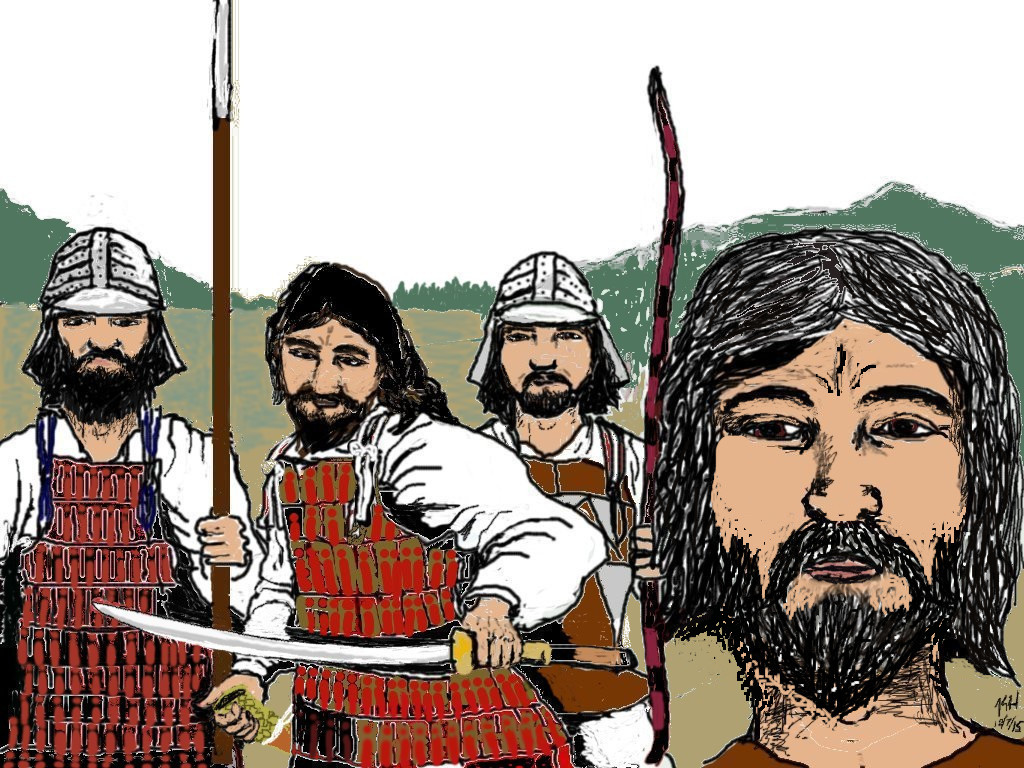 This picture shows the Emishi in the area near Taga Castle (and the coastal plain) getting prepared to attack the encroaching Japanese. This area had seen much Japanese settlement over the past two centuries, but it was with the building of Taga Castle in 724, and the earlier Momunohu Castle, and the imposition of Japanese control that prompted the Emishi to react violently against them. This shows the Emishi armored with keiko and tanko armor either taken from fallen Japanese soldiers (note the hasty repair done on one of the suits) or given to them from the government in return for service as fushu (allies), and armed with their main weapons, the wara-bite-tou sword displayed by the Emishi in the middle, flanked by one holding a spear and the other a lacquered bow.  This picture incorporates the new findings from yoko-ana tombs from the area. They are shown as a mixed epi-Jomon and Kofun type population typical among the Emishi of this area.