Destruction of Castles in Michinoku

The creation of forts and the intrusion of settlers stirred up the antipathy of the Emishi. However, there was little in Hoki 1 (AD 770) that suggested the coming storm of renewed violence.

'' Emishi no kimi Ukutsuhau and others led their [Emishi] clans back to Emishi territory. They [Country office] sent a messenger to call them back, but Ukutsuhau did not agree to return. He [Ukutsuhau] said '' I shall lead one or two companion clans and will surely invade the castles and forts."

In Hoki 3 (AD 772), Emperor Konin appointed Ootomo no Surugamaro to Supervisory Delegate of Michinoku and Ideha. He tried to refuse this appointment due to old age, but the emperor insisted that he take the position because of his ability. Fighting probably broke out before Ootomo's arrival. In Hoki 5 (AD 774), Ki no Hirozumi arrived as Vice General of the Peace Guard.

In July of the same year of Hoki 5, the Japanese army suffered the first severe defeat at the hands of the Emishi.

A report from Michinoku country stated, '' the coastal Emishi launched an attack quickly, set fire to the bridges, blocked the roads, cut communication lines, and invaded Momunohu Castle, breaking its western block. The soldiers were not able to resist. The governor assessed the situation and asked for forces to subdue the enemy.”

The ruins of Momunohu Castle show exactly what happened. Fire broke the north bank of the fort, but the east bank held firm. The west and south banks have not yet been excavated. All political office buildings along with other buildings were burned. The evidence suggests that the soldiers were not able to withstand the attackers, however, the Emishi withdrew before they could completely destroy the fort.

Japan mobilized 10,000 soldiers from the east countries. This force restored the defensive banks and turrets of Momunohu Castle, but the political offices were never rebuilt.

In August, the general reported to the government that “rebel” actions remained at a low level and was unlikely to cause serious harm. He argued that if he attacked now, due to the season of thick grass, the attack may not succeed. Emperor Konin scolded him, “military mobilization undertaken too late lacks consistency with the principles of attack and defense.'' Ootomo advanced. His army invaded Tooyama, north of Momunohu. He reported that '' the army overthrew their dens and let them fall into so miserable a distress that many wanted to surrender." The threat from the coast was dealt with in this campaign, but the Japanese recognized that the real menace came from the north, from Isawa and Shiwa.

In Hoki 7 (AD 776), the Japanese army initiated the attack on the northern Emishi. In February, the plan was to mobilize 20,000 Michinoku forces with a vanguard of 4,000 troops out of Okachi of Ideha toward Shiwa. This was the first campaign against Isawa and Shiwa, the strongest tribes among the Emishi. The Ideha force that crossed the Ou mountains did not surprise the Emishi: in May the attack failed miserably. A second force numbering 3,000 attacked out of Michinoku in November with the same result.

General Ootomo died on July 7 of Hoki 8 (AD 777). His vice general Ki no Hirozumi succeeded as the General of Peace Guard and as Governor of Michinoku Country. He was appointed to the Supervisory Delegate the following year. The Emishi of Ideha revolted in December. Saeki no sukune Hiramaro, Provisional Vice General of the Peace Guard took his forces to the area and quelled the rebellion.  Japan prepared 50 ships on the Pacific side of the front.

On January 26 in Hoki 11 (AD 780), the Emishi invaded Sendai plain and put to the torch houses in Nagaoka south of Korehari Castle. General Ki devised a plan in February:

[I] want to take the ship road and attack the remaining rebels. It is so cold this year that the river has already frozen over, so ships cannot travel. Now the rebels do not stop invading. Therefore, [we] must shut down the invasion route. In March and April when the snow melts and rain fills the land, [I] will mobilize 3,000 soldiers and [we] shall advance into the rebel's land and build Kakubetsu Castle.

The government permitted this plan to be realized.

In May, General Ki went to Korehari Castle in preparation to build Kakubetsu Castle. Suddenly, Korehari no kimi Azamaro, an Emishi officer in the Japanese army, killed the general along with Michishima no Ootate, the Great Orner of Oshika district. Interestingly, Azamaro sent Vice Governor Ootomo no Matsuna to Taga Castle with a contingent of bodyguards from his army. When they heard about it the people of Taga panicked.  Along the way, the Vice Governor along with his officials abandoned this contingent: without a leader they may have scattered. A few days later, Azamaro himself attacked Taga Castle with his army, plundered and burned it before withdrawing. Archeologists have discovered tell tale signs of the destruction by fire, and a lacquer paper that recorded the transportation of provisions from Iwaki district to Taga Castle in September. This proves that the castle was attacked, but quickly recovered from the attack.

In the same year, Hoki 11 (AD 780), the Emishi invaded Okachi and Hiraga. The people of the two districts suffered plunder at the hands of the Emishi. The attacker was probably Isawa or Shiwa. 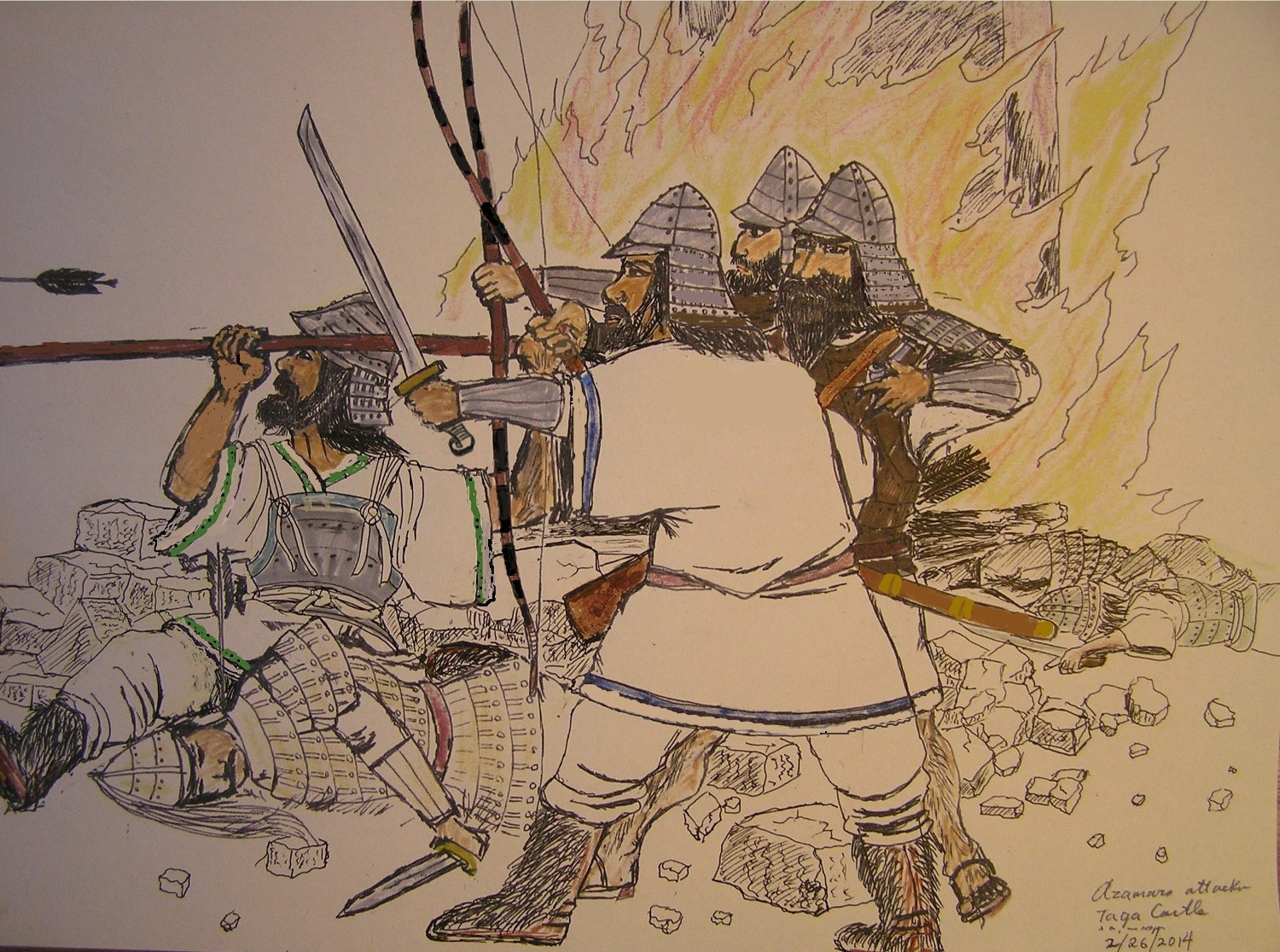 Azamaro's forces strike terror in the Sendai plain as Taga Castle falls in this illustration.  This marks the sixth year of the so-called Thirty Eight Years War.  The Emishi rebellion started with Ukutsuhau and Azamaro and a number of important forts fell to them as they attacked and plundered their way south.  Momunohu castle was burned in 774. Taga castle, the administrative headquarters of the imperial government in Michinoku was then attacked and similarly put to the torch in 780.  Before the battle of Subuse one could argue that Azamaro's attacks penetrated further south and struck greater fear upon the Japanese than any Emishi had done since. (1)

Korehari no Azamaro was a subject Emishi who had been appointed to serve in the Japanese government. He was the Great Orner of Kamihari district, probably close to Korehari Castle (some scholars think that Kamihari was actually referring to Korehari). He was awarded the rank of lower juu 5 i because of his service in the war in 778 (Hoki 9). The attainment of this rank for an Emishi was unprecedented, because it gave him the privileges of an aristocrat. In the Shoku Nihongi it is recorded that the aristocrat Michishima frequently insulted him because of his background. In the same records it is written that general Ki at first looked down on Azamaro, but came to rely on him perhaps due to his influence on allied Emishi. Emperor Konin retired from the shock of this reversal of fortunes. His son became emperor Kan'mu as the war continued.

A few comments about Azamaro are needed here. The Japanese at this time absorbed the Emishi (related to the ancestors of the Ainu) into their society, but later in history discriminated against the Ainu. Azamaro is also a fascinating figure: as an Emishi officer in the Japanese army, he stood between two competing allegiances and two competing groups of people.  In the end he chooses to fight against the Japanese.  Japanese society during this time period is also very different by being able to absorb different ethnic and racial groups, something modern Japan is not capable of doing easily. 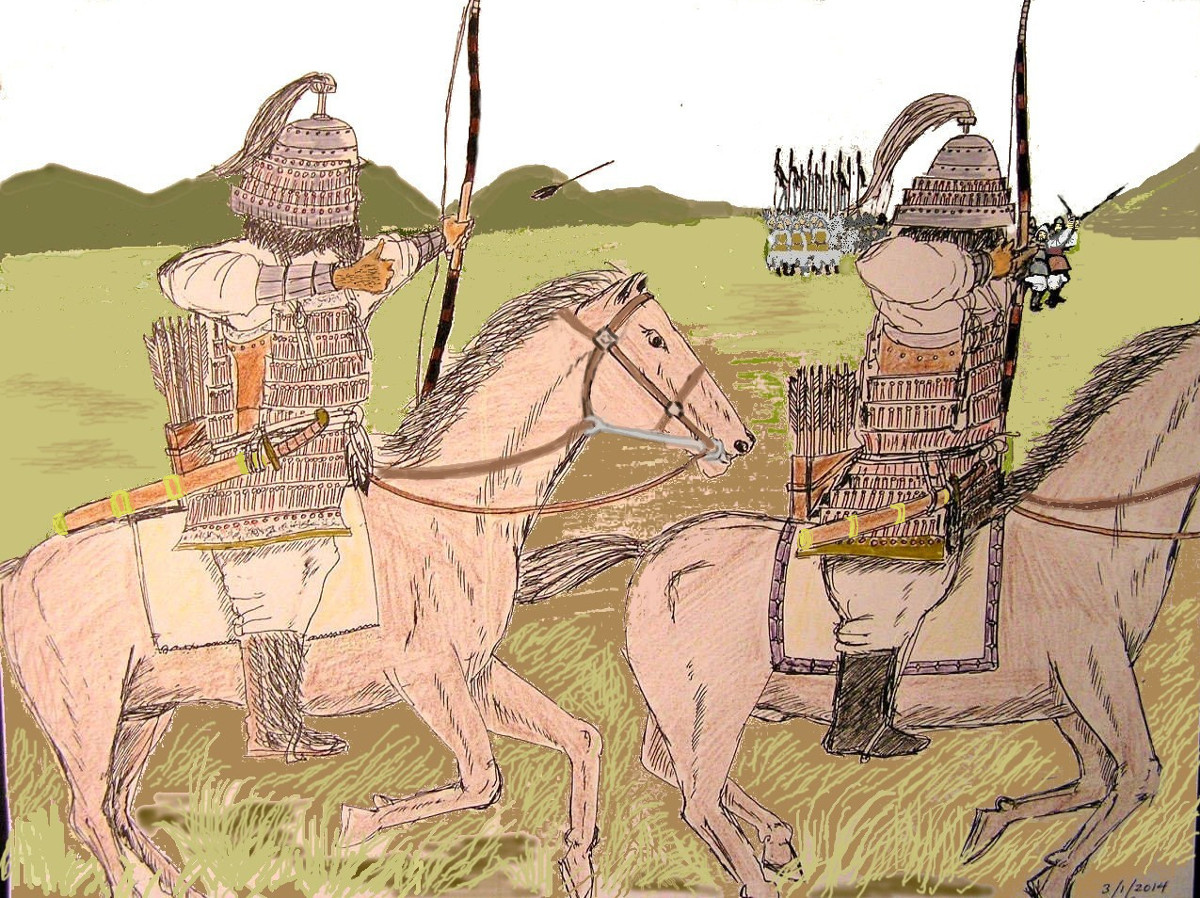 Emishi battle line of the late eighth century consisted of mounted archers that were used as a quick strike force that proved to be too much for the Japanese army to catch and defeat.  Here Azamaro's forces are shown harrying the Japanese army as they raid their territory.  They are shown wearing keiko armor and are armed principally with the bow and sword.  He had access to the latest armor probably more as a result of his plundering of Taga Castle than as a fairly high ranking officer in the Japanese army before his defection.  It was only after the Japanese gentry started training their sons in horse archery, and the army recruited them to fight the Emishi did the war turn in their favor.  For the Emishi archery was second nature as they were hunters.  From the trained horseman came the samurai, so the rise of the samurai and their style of warfare was a direct result of the Emishi wars.  Azamaro, leader of the Korehari Emishi and the Isawa Emishi were the two clans that fought the Japanese throughout the Thirty-Eight Year War.

1. The Emishi under Azamaro's command are shown here as mainly an epi-Jomon people with some Kofun element (in comparison see Building the Fort Line in Michinoku page). The clothing reflects various cultural influences.  The trousers and bearskin boots are from the Nara period reflecting the influence of Japan (the bearskin came as trade goods from either the Emishi or Po-hai, a Tungus state; the practice may also have originated from the former).  The Japanese armor shown here is tanko and was probably acquired by Azamaro and his followers through trade.  As discussed elsewhere, during the eighth century keiko armor was rapidly replacing tanko armor used since the kofun period. The battle of Taga probably aided this process among the Emishi as the armory of Taga containing keiko armor was raided and likely distributed among the victors.  The clothing reflects pre-Ainu design and reflects simple decorative bands which eventually evolved during the Satsumon culture into the bold geometric designs found in Ainu textiles. However, this is speculative as textile samples are not confirmed.  The bows are lacqured as it appears in Epi-Jomon sites. It is also found among Ainu depictions.  Laquer was a technology that was known and used by the Jomon people to waterproof and strengthen wood.