Naval Expedition of Abe no Hirafu

Abe no Hirafu's expedition is the first reliable record of the conflict between the Yamato state and the Emishi.

In an entry in the Nihon Shoki from April of 658 (Seimei 4), ''Abe no Omi led a force of 180 ships against the Emishi.'' This was Abe no Hirafu, the Governor of Koshi:

The Emishi of the two districts of Agita (current Akita) and Nushiro (current Noshiro) who saw this invasion fleet were struck with fear, and hoped to surrender. [Abe] adjusted his army formation and landed on Agita's shore. Oka (or Omka), one of the Agita Emishi, swore an oath, '' we do not hold bows and arrows against the official navy; by our nature having them only for eating meat. If we did use bows and arrows against official navy, god of Agita Seashore will know. We will serve official government with a pure mind.'' Abe gave Oka the rank of Upper Shouotsu, and set governors over the territories of Nushiro and Tsugaru. [Abe] invited the Emishi of Watarishima (Hokkaido) to Aruma Beach (current Jusan'minato?), and held a big party and returned.

On July 4, 200 Emishi came and were welcomed. The government bestowed official ranks and gave them flags, drums, bows, arrows and armor.

In an entry of this year it is written, ''Abe attacked Ashihase, offered 2 living higuma (brown bear of Hokkaido) and 70 hides of higuma [to the emperor].''

[The government] sent Abe no Omi to lead a force of 180 ships to strike the Emishi. Abe no Omi gathered 241 Emishi from two districts of Akuta (same as Agita) and Nushiro, 31 of their captives, 112 Tsugaru Emishi, 4 of their captives and 20 Iburisae Emishi (location unknown) to one place, held a party and gave them provisions... Then [he] attached pieces of five color cloth to one ship and dedicated it to the god of the land. When [he] reached Shishiriko, two of the Tohiu Emishi (location unknown), named Ikashima and Uhona, came and said,  "Shiriheshi (unknown) should be the local seat of government.'' ( ...Seat of government might be district of the Emishi?) Following the advice of Ikashima and the other, [Abe] placed a district governor there and returned. [The government] promoted the governors of Koshi and Michi no Oku two grades in rank, and the district and chief officials there one degree in rank. One book says, that Abe Hikita Omi Hirafu fought the Ashihase and returned, offering 49 captives.

The nature of the Emishi captives is a question mark. If they were slaves from war or other causes why did they participate in the official parties? I think that the official party may be a pact forming ceremony between the Emishi tribes who had submitted to the Yamato state and the Japanese. The tribes exchanged captives as proof of ending hostilities. My conjecture gives an answer why later Akita Emishi became very friendly with Japanese government.

We can find 'Iburi' and 'Shiribetsu' on today's maps, but these were place names given in the 19th century. The actual locations of Iburisae and Shiriheshi are unknown.

In an entry of July 3 of the year, it is written:

[Government] sent Sakaibe no muraji Iwafu, of lower shoukin rank, and Tsumori no Muraji Kissho, of lower daisen rank, to T'ang China as envoys. [They] brought with them two Emishi, a man and a woman of Michi-no-oku.

Contrary to the envoy's replies, archeologists have discovered many houses in the areas where the Emishi inhabited. The Emishi also had knowledge of rice cultivation and the cultivation of other cereals. The lies that the envoy spoke to the T'ang emperor probably reflected the ideology of Japan's Yamato state, as a civilizing force towards the barbarians outside the empire.

[The government] sent Abe no Omi to lead a force of 200 ships and attack the Ashihase country. Abe no Omi let the Michinoku Emishi ride on his ship, [and they eventually] reached a large river side. There were over 1,000 Watari Shima Emishi stationed together on the shore. [Abe] camped on the other side of the river. Two appeared and shouted rapidly at Abe's camp, '' Ashihase's many ships have come, and [they] want to kill us, so we hope to go across the river and serve you!'' Abe no Omi ordered one of his ships to go to the place where the two Emishi were shouting. [He] asked about the place where the rebels hid and their number. The two Emishi pointed out their hiding place and said they had over 20 ships. So [he] sent a messenger to call [the Ashihase], but they did not agree to come. Abe no Omi then piled silk, arms and iron on the shore and gathered their own favorite goods to lure them. Ashihase then showed up with their ships, putting up wood with feather as a flag. [They] came with a pole [to row] nearby and stopped in the shallows. From one ship two old men appeared, walked around to look at the silk and other piled goods. Soon [they] put on clothes and each took one cloth, and then returned to their ship. After a while the old men came back again to take the clothes off, and put down the cloths which they took, went back to their ship and left. Abe no Omi sent several ships to call them out. [They] did not agree to come, but returned to Herobe Island (unknown). After a while they requested peace, but [Abe] did not accept this offer. Herobe is a different place from Watari Shima. [The Ashihase] fought from their fort. Noto no Omi Mamutatsu was killed by the enemy. As the battle continued, the rebels realizing that they were being defeated killed their own wives and children.

This group of Ashihase was badly defeated, but we don't know the exact number of casualties.

The Ashihase were spreading their power and influence further south in the form of a migration, that according to the Nihon Shoki included families. The Japanese fleet had come into the area deliberately to establish their territory vis-a-vis the Ashihase as they were seen as a foreign power. Were these people recent arrivals from central Hokkaido or an established settlement? This was probably either Hokkaido`s southern peninsula or present day northern Tsugaru peninsula (see text for discussion). Interestingly, the various Emishi who lived in the region are used as allies by Abe`s naval expedition and some joined his army against the Ashihase, so this would place the latter as being outside the Emishi frontier as well.  According to my reading of the history and interpretation of the scant information available, the Ashihase were not ancestral to the Ainu, but were Okhosk people who migrated to the area.  However, what is unknown is whether they had mixed with the Hokkaido inhabitants such as the Jomon when they moved south from Sakhalin Island as my picture interprets. There is no doubt in the Nihon Shoki that they are seen as a different and distinct people from the Emishi.  Whatever the case, the fighting was desperate against the Ashihase who eventually could not hold out against Abe`s army.  This picture depicts the furious fighting that took place.

In an entry from May:

Again Abe no Hikita Omi offered over 50 barbarians. Again [the government] made Shumi mount (some type of mound) like a tower, and welcomed 47 Ashihase there.

We don't know whether the Ashihase from these three records belonged to the same group or not.

There have been arguments about the place names in these entries. Some have argued that Watari Shima (Crossing Island) was the northern area of Honshu (not an actual island). They say it was called 'island' because only ships could reach the area. In this argument the river is thought to be the current Iwaki river. Others have insisted that Watari Shima is Hokkaido, and that the river is the Ishikari. Herobe was either Rishiri, Rebun, Amari or Yakishiri.

The usage of shima of former interpretation was found rarely about 'Koshi no Shima'. But this was never natural. The sentence about Herobe shows that the author of Nihon Shoki assumed Watari Shima was an island. We know from archeological records that trade took place between both sides of the Tsugaru Strait. Furthermore, the Yamato navy was outfitted for the task of invading and reinforcing armies in the Korean Peninsula. Crossing the Tsugaru Strait was not a difficult task for the navy.

The records do not reveal the objective of these expeditions. Though the authors of the Nihon Shoki emphasize that they took place as an attack on the Emishi and Ashihase, many current historians believe that the voyages were to establish Japan's trade routes to the north as one of the main objectives. Abe's offer to Ashihase included arms and iron. It is hard to believe his mission was strictly military.

Abe's expeditions were halted after war broke out in the Korean Peninsula. Abe was appointed as the Rear General (Kou Shogun) of the Imperial Navy and fought the Shiragi and T'ang in a naval engagement in AD 661. The Japanese navy suffered a stunning defeat at the Battle of Hakusuki no E. The front and center fleets were destroyed. Japanese forces retreated from the Peninsula along with their allies, the Kudara (and their refugees).  The activity of the Japanese navy never recovered from this defeat, and the northern naval expeditions did not continue.

Hudoki of Hitachi, adjacent to the Pacific Ocean, writes about the large ruins of a ship built during the time of the Tenchi (T'ang) Emperor. From this we know voyages were undertaken from the Pacific Ocean side of Japan as well. 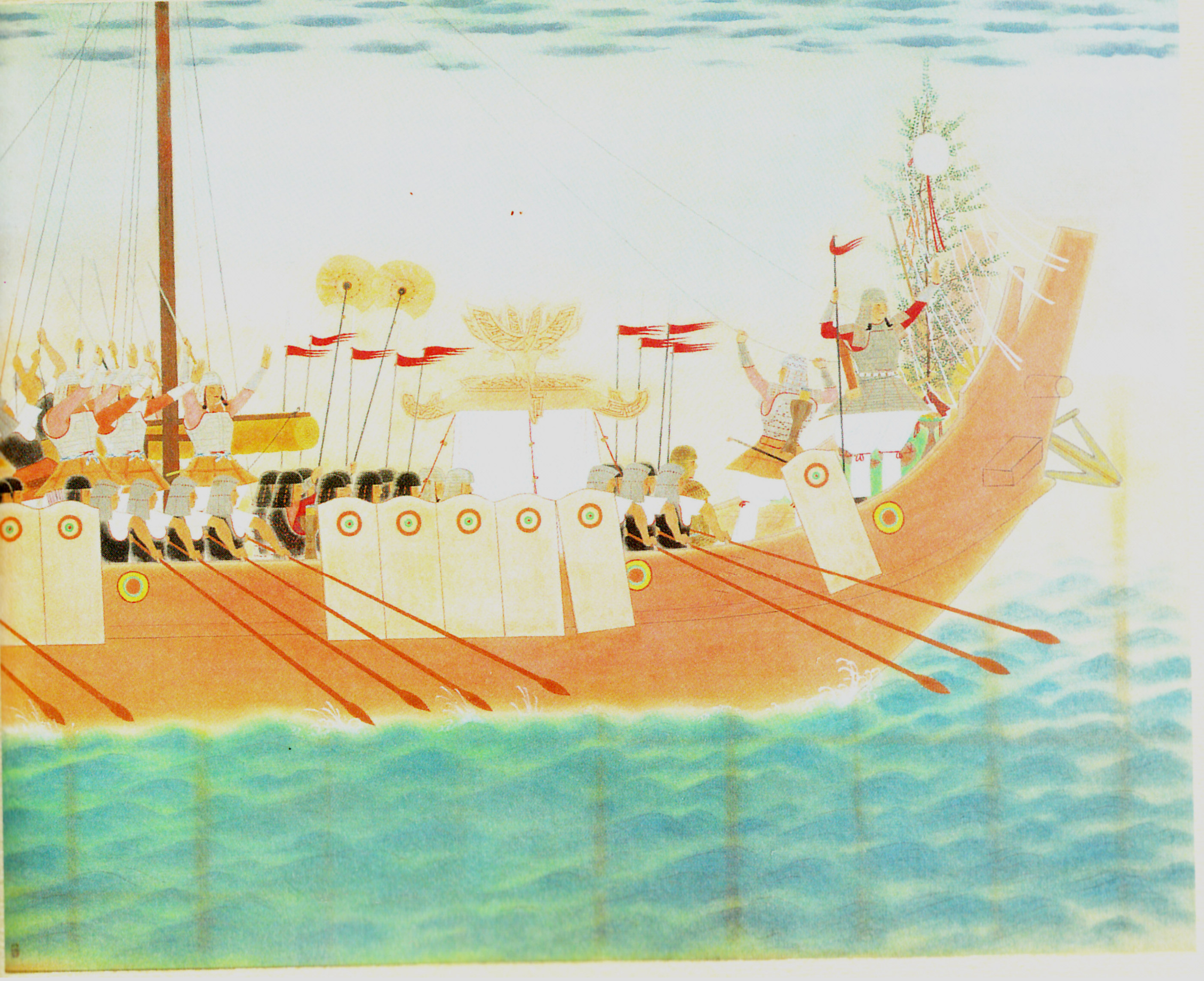 Original painting showing the semi-legendary Jimmu tenno (Emperor Jimmu) invading the eastern countries by artist Yasuda Yukihiko (1881-1964). This gives some idea of the appearance of the Naval expedition of Abe no Hirafu though centuries later than Jimmu tenno.  The Japanese army is wearing tanko armor and dress reflecting the fourth through seventh centuries. From Kojiki (2002:24).

Who Were the Emishi? | Ideha Foundation